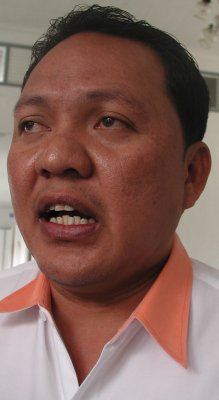 At the meeting K. Surapong explained that, before the tsunami, Sakoo OrBorTor had applied to K. Thanapong for permission to build permanent housing for the encroachers. K. Thanapong refused, but instead agreed to allow temporary housing to be built.

After K. Thanapong’s departure, K. Surapong said, the encroachers had complained to Sakoo OrBorTor that the temporary houses would be structurally unstable and too small.

“So we applied to Park Chief Sakon to build stronger, larger houses, and he agreed,” said K. Surapong.

However, K. Thanapong returned to his post at Sirinath on May 6, and has since refused to allow construction to continue because he had never approved the building of permanent houses.

K. Surapong explained that Sakoo OrBorTor had received a budget of 15 million baht from the Tourism Authority of Thailand and permission to use seven rai of national park land to build homes for encroachers and to develop the area surrounding the building.

“The national park [when K. Sakon was Park Chief] gave approval for us to start construction before obtaining approval to use park land, but said that we could send the paperwork later,” he said.

“However, work has now stopped. If we demolish this structure, it means we demolish a building already worth about 6 million baht.

“Permanent homes are the real way to solve this problem. Sakoo OrBorTor can rent them out to local people,” he added.

However, Gov Udomsak said, “The building is different from the plans, and it obscures the beautiful, natural view. It is so ugly.”

The Governor added that he did not think that building houses for encroachers was fair for people who do not encroach on government land.

“This is my policy: whoever encroaches on government land, if they build in the daytime, we will demolish it in the nighttime.

“After that, we’ll see them in court,” he said.

The Governor ordered the Department of Public Works and Town & Country Planning, K. Surapong and K. Thanapong to find a new location within one week where the OrBorTor can build houses for encroachers.

K. Surapong said that he expects the new location to be on 10 rai on the north side of the Pearl Village Hotel.

Gov Udomsak also ordered that the partially-built homes in the park be demolished as fast as possible once a new location has been decided on.