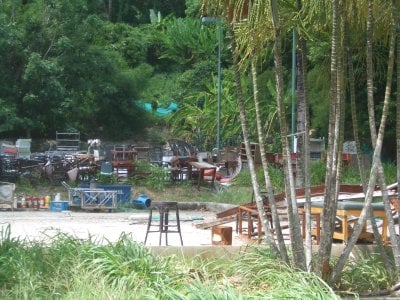 KAMALA: Kathu’s top official paid an inspection visit on Wednesday evening to the tsunami-damaged Kamala Bay Terrace Resort, where he asked the hotel’s sole remaining employee to try to organize a clean-up as soon as possible.

The complaint, lodged by a Kamala businessman, charged that the resort had failed to conduct any clean-up in the eight months following the tsunami and is an eyesore threatening the recovery of the tourism industry in the area.

Phuket Governor Udomsak Uswarangkura, originally scheduled to attend as well, called in to cancel at the last moment because he was busy with visiting Sports and Tourism Minister Pracha Maleenont.

There to meet the officials was the resort’s accountant, Arom Nanna, who told the Gazette that she was under orders from the resort’s Indonesian owner not to take any action at the site until claims with the insurance company had been cleared up.

She explained that the owner was facing financial difficulty because he had suffered tsunami losses not only in Phuket, but also in his native country.

K. Arom added that she had worked for the hotel for 10 years and was serving as its representative because she was the only employee still on the payroll – the hotel’s security guards are provided by an outside contractor.

K. Khantee, who said he sympathized with the owner’s plight, told the Gazette that he had already ordered the Kamala Tambon Administration Organization (OrBorTor) to clean up public areas surrounding the property.

He did not, however, order a fence to be put up around the property as that would be expensive, possibly illegal, and in his view was not really justified by the current condition of the resort.

He asked K. Arom to ask the owner to do his best to clean up the site as soon as possible.

K. Nikorn said he would report the results of the visit to Gov Udomsak.