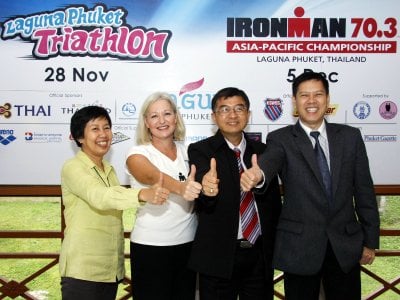 PHUKET: Ahead of the 17th Laguna Phuket Triathlon this Sunday, Phuket Governor Tri Augkaradacha has lauded the Phuket Provincial Administrative Organization (PPAO) for becoming an official sponsor of the event for the first time ever.

The annual triathlon kicks-off a week of sporting and social activities culminating with the inaugural Ironman 70.3 Asia-Pacific Championship the following Sunday on December 5, the 83rd birthday of HM King Bhumibol Adulyadej.

“We are pleased that our community is so closely involved in this combined effort to showcase the best of our island, particularly our warm and welcoming culture,” Gov Tri said.

“Every year the Laguna Phuket Triathlon has grown larger. With the addition of the inaugural Ironman 70.3 Asia-Pacific Championship, Phuket is showing the world all its wonderful capabilities and expertise in staging major world-class sporting events,” he added.

“All the support provided by Phuket’s provincial government and the enthusiastic involvement of local residents are what make our triathlons complete community events,” he said.

“We’re very pleased that the Phuket Provincial Administrative Organization has become an official sponsor of our events for the first time to enhance this community involvement; its financial support is greatly appreciated,” he said.

These include special traffic management and police control; extra medical facilities; an army of local volunteers to work alongside hundreds of Laguna Phuket employees at aid stations along the triathlon courses and event administration areas, as well as hundreds of local students and school children to line the roads to boost the carnival atmosphere with flag-waving and cheering.

The triathlon on Sunday comprises a 1.8-kilometer swim, 55km bike ride and a 12km run.

The event will start at 7am on the beach between the Dusit Laguna Resort and Laguna Beach Resort.

The six-kilometer fun run will start at 8am at the Y-Junction at the entrance to Laguna Phuket.