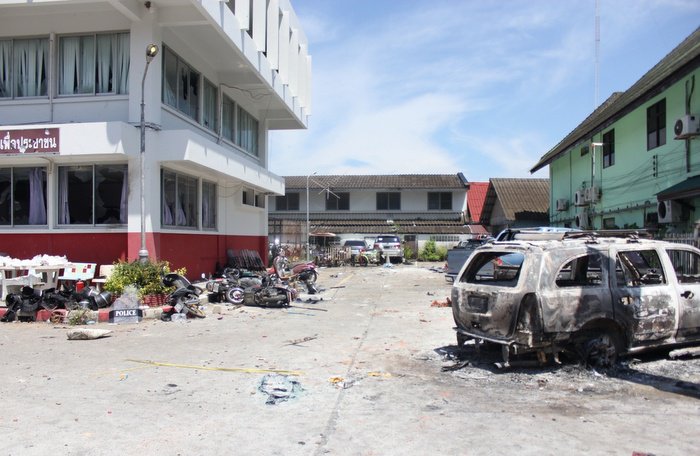 PHUKET: The Phuket governor this weekend squared off against rumors that another riot will strike the island due to suspicions over the fairness of the investigation into the deaths of two suspected drug dealers earlier this month.

“As the Phuket Governor who has taken responsibility for the riot, I plead with you, the people of Phuket, especially those who are again thinking of breaking the law – please don’t,” Governor Chamroen Tipayapongtada wrote on his Facebook fan page Saturday. “If you feel that justice is not being served, please come see me in person at Provincial Hall or file a complaint to the Damrongtham Center [ombudsman’s office]. This is the best way for us to find a solution.”

Thalang Police Superintendent Chanuchan Cholsuwat confirmed to the Phuket Gazette that he was aware of the posts being shared via social media about a possible second riot.

“Our officers are checking on the situation. However, at this point, there is nothing to worry about,” Col Chanuchan said. “We have yet to reinforce our security at the station, but we are prepared.”

Col Chanuchan noted that backup police officers from all stations on the island were ready to respond if there was another attack.

“Violence is not the best way to end a problem; it just creates another problem,” he said.

Though officials claim the riot had no affect on the island’s tourism industry, the unprecedented attack on Thalang Police Station and closure of Thepkrasattri Road on October 10 made headlines around the world.

About 20 police officers were injured and more than 6 million baht worth of damage was done, as hundreds of rioters set fire to police vehicles and bombarded the station with bricks and rocks.

The catalysts for the violence were the deaths of suspected drug dealers Patomwat Panarak, 22, and Teerapong Srisamut, 17, who died during a police chase after allegedly refusing to be searched at a checkpoint.

Protesters claimed that the 50 ya ba (methamphetamine) pills and one kilogram of kratom leaves in the young men’s bags had been planted by the police. The allegation was vehemently denied by Provincial Police Commander Patchara Boonyasit.

“Though the riots yielded immediate results with the Ministry of Interior demanding an investigation into allegations of excessive force by the four officers who crashed into the fleeing men, we would have conducted a fair investigation ourselves,” Governor Chamroen told the Gazette last Wednesday. “Now, we will not only ensure that this matter will be looked into, but we will also hunt down those who helped turn the peaceful protest into a violent riot, damaging Phuket’s international reputation.”