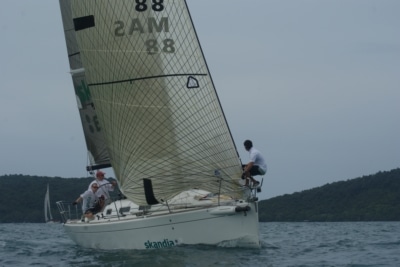 Racing on Evolution Sails, formerly known as Quantum Racing, he claimed first place in both races in the IRC Racing class.

The 2008-09 winner, Neil Pryde, finished second and third on Hi Fi with Peter Ahern on Yo! 2, also securing second- and first-place finishes.

Elsewhere, Andrew de Bruin on Awatea, won both races in the Charter Class.

David Thomson on Madame Cholet and Alan Carwadine on Da Vinci Niña shared a victory apiece in the Multihull class.

Hans Rahmanns’ Voodoo Child won both races in the Firefly 850 class, beating Moto Inzi to the line by a mere five seconds in the afternoon race.

For Peter Dyer, skipper of Madame Butterfly, it was a good start to the regatta. “It was good. Breezes weren’t too bad – somewhere around 15 knots, with good gusts. We did a nice figure of eight course in the afternoon, which made for some very close racing. Good competitive stuff,” he said.

Heavy rains in Phuket cause landslide