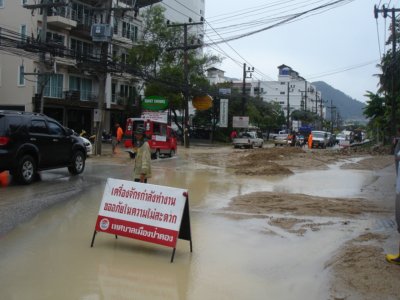 The landslide started from a construction site on Petchakut Road, 150 meters above Sirirat road, opposite Simon Cabaret.

Patong Deputy Mayor, Prasarn Yordtor said water from a burst pipe on Pethcakut Road, combined with the heavy rains, had triggered the landslide.

“This is the first time construction work has caused a landslide,” he said.

He said the construction error was worrying, but it would not happen again.

Local municipality workers and fire service teams started clearing the road with tractors soon after dawn this morning, but their efforts were hampered by heavy rain which continued to lash the area all day.

Ironically, residents of Soi Petchakut have been without water supply for more than six weeks because of construction problems on the steep hill.

For the past month and a half, they have been unable to wash or shower.

Builder, Chris Gray who has owned a property on Soi Petchakut for four years, said the area’s infrastructure simply couldn’t cope with the number of condos and apartments being built in the area.

Resident Knut Giesen said he had been forced to pay a private contractor to deliver 2000-litre water tanks to his home.

“The government is asking us to take more showers, to wash our hands and to generally keep clean to avoid the risk of swine flu infection, but for the past six weeks we haven’t had any running water,” he said.

Mr Knut said the residents still had to pay their monthly water bills, even though they weren’t getting any water.

“We have been told if we don’t pay our water bills, our water will never come back on,” he said.

Chief of Engineering at Phuket Waterworks, Pichai Wetchrungsri said the problem had been caused by the elevation of Soi Petchakut.

“A lot of foreigners complain about the water supply, but we don’t have enough water pressure from Kathu Waterworks station which sends water to Patong,” he said.

“But that work won’t be completed for another one or two months,” he said.