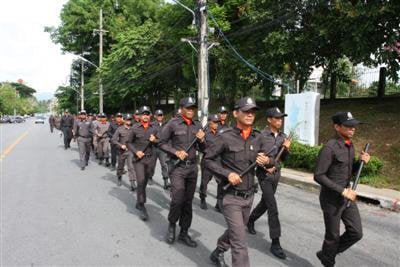 “Asean, as well as members of the ARF, would like to work with Myanmar [Burma] and are ready to assist in its efforts to promote democracy, human rights and well-being among her people,” said Foreign Minister Kasit Piromya.

“We have asked Myanmar’s foreign minister to convey this sentiment to the Myanmar leadership. It is hoped that Myanmar will be responsive to the international community’s concerns,” said Mr Kasit, in his capacity as chairman of the 16th Asean Regional Forum, which concluded yesterday.

The international community has called on Burma to release all political prisoners, including Suu Kyi, and to include all stakeholders in the democratization process.

Earlier yesterday, US Secretary of State Hillary Clinton insisted that Suu Kyi must be released unconditionally.

Suu Kyi, who has been under house arrest for many years, was charged in May with violating the terms of her confinement by “harboring” an American who swam to her lakeside house.

Clinton, who used the term ‘Burma’ rather than ‘Myanmar’, also called for a fair and open election in the country next year.

Asked if Asean should expel Burma if it did not free Aung San Suu Kyi, Mrs Clinton replied, “It would be an appropriate policy change to consider.”

However, Prime Minister Abhisit Vejjajiva later downplayed a suggestion from Mrs Clinton that Burma should be kicked out of Asean because of its poor human rights record.

Isolating Burma would not help the reconciliation and democratization process in the military-run state, so Asean would continue to engage and assist Burma, Mr Abhisit said.

Mr Kasit said yesterday that the ARF also urged North Korea to return to the Six-Party Talks about the nuclear crisis on the Korean Peninsula.

“The goal is to bring about peace and stability to the Korean Peninsula and de-nuclearization of the Korean Peninsula. We urge [North Korea] to return to the Six-Party Talks, to look beyond the past and join others in finding a way forward,” Mr Kasit said.

He also said the ARF strongly condemned the bombings last Friday in the Indonesian capital Jakarta.

The attacks on two US-owned hotels were ‘a reminder to us that terrorism remains a very real threat to peace and stability – nationally, regionally and internationally’.

Security yesterday was tighter than normal on the last day of meetings between Asean foreign ministers and dialogue partners.

Foreign ministers from the 10 Asean member states met their counterparts from 26 countries and the European Union to discuss political and security matters.

Established in 1994, the ARF consists of 26 countries and the European Union.