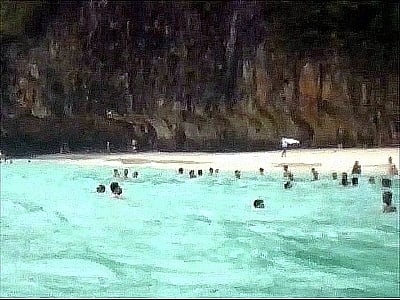 PHUKET: More than 100 tourists on their way to Phi Phi Don Island were forced to shelter from heavy seas at Maya Bay on Phi Phi Leh Island, east of Phuket, yesterday morning.

At about 10 am, several speedboats and longtail boats were forced to seek protection in the bay, where the movie ‘The Beach’, starring Leonardo Di Caprio, was filmed in 2000.

Some tourists on snorkeling tours of the bay were also forced to remain alee due to rough conditions offshore.

“I was about to leave Maya Bay with my passengers, but there was a strong wind and the waves were three to four meters high,” explained longtail boat operator Manote Saengkiew, 47.

“We moored in the bay with several other boats. However, some passengers were so scared they climbed out of the boats and swam ashore,” he said.

Conditions eventually improved and the vessels were able to reach their destinations, with no reports of sinking or injury.

When asked about the recent weather conditions, Krabi Department of Disaster Prevention and Mitigation chief Thalerngsak Bhuwayanpong told the Gazette yesterday that “Weather conditions are not suitable for sailing and no small craft should be leaving port.”

“People who live by waterways must be aware of the potential for flooding and keep their eye on the latest weather forecast,” he added.

Today’s 24-hour forecast for Krabi and Phuket calls for cloudy conditions with widely-scattered thundershowers over 30% of the region. Winds will be southwesterly at 15-35kmh.

Wave heights will be one to two meters, more than that in rain areas.

However, a rain advisory for the Andaman that was in effect over the past several days was not re-issued by the Meteorological Department this morning.