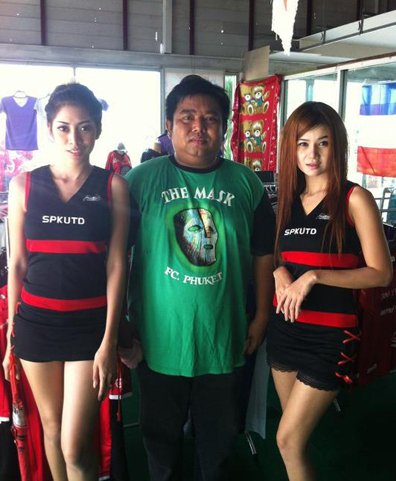 Phuket’s 4-3 defeat on penalties away to Samutprakarn United (SPK UTD) followed a 1-1 draw at the end of extra time.

SPK UTD’s “Factory Boys” looked to seal the match in the 91st minute when their leading scorer, N-kuha Yankee, an African import, capitalized on a cross from a free kick.

With the end of injury time looming, the Islanders stepped it up a notch, with Ivorian Ibrahim Kanoute sprinting the length of the pitch to receive a long ball from Suthee Sakdiwong and drive home the equalizer taking the match into extra time.

With either side failing to score in two 15-minute halves of extra time, a shootout would settle the matter.

Missing the mark for Phuket were shots by Phuket’s Wacharakorn Klaithin and Marcio Santos – fantastic positioning from SPK UTD’s African keeper Lamen June ensured that his side advance 4-3, with a final score of 5-4.

Krabi FC’s league cup campaign came to a similarly end, in nearby Laad Krabang on the fringes of Bangkok, in their match against Division 2 side Samutprakarn Customs United (SPCU).

Despite scoring first in the 70th minute with a strike by Brazilian import Christiano Lopes, the Andaman Eagles found themselves suffering the same fate as Phuket,

SPCU’s Sakarin Mingsamorn answered with an equalizer 10 minutes later, prompting extra time and ultimately a penalty shootout ending 4-3 in favor of the home side.

Likewise, Songkhla FC were defeated at home in a 3-4 penalty shootout against premier side TOT Sports Club, following a 2-2 stalemate.

The other southern side to lose last night was division two side Hat Yai FC, who put up a commendable fight at home against premier league powerhouse Buriram United, going down 0-1 as a result of a second half goal by Buriram’s Chalermsak Kerdkaew.

With no more cup opportunities remaining this season, Phuket can now turn their full attention to league play as they try to escape the relegation zone.

Their next match is on Saturday away against 6th place PTT Rayong.

To be played at PTT Stadium in Rayong, kickoff will be at 6pm.

Then Phuket are set to finish off the season’s first leg at home on July 22 with a Southern showdown against 10th place Songkhla FC.

To watch all the drama from Phuket Fc’s game last night click here.

Other results from last night’s Round of Toyota League Cup action: