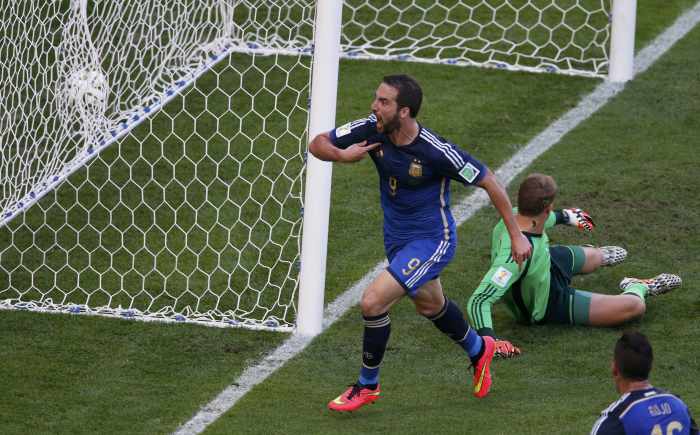 PHUKET: Germany’s impressive strength in depth proved the decisive factor in their 1-0 extra-time World Cup final victory over Argentina on Sunday as Lionel Messi failed to deliver the golden touch for the South Americans.

It was a substitute, Mario Goetze, who struck the decisive blow for Germany after coming on for Miroslav Klose while in contrast, with Messi below his best, Argentina’s other strikers failed to compensate.

International football has become a 14-man game, never more so than when extra time makes it a two-hour contest, and it was Germany’s bench that provided the extra firepower to turn the match in their favour.

Argentina came into this tournament widely described as a team with an abundance of attacking talent but a questionable defence – but throughout the month in Brazil and, in particular, in the final, they proved to be the exact opposite.

The Argentine back four was again tight and disciplined throughout – they did not conceded a goal inside 90 minutes in the entire knockout phase of the tournament – but an attack which managed eight goals in seven games lacked the killer touch.

Half of those eight goals came from Messi but the four-times world player of the year failed to score in the knockout stages.

Germany, though, lived up to their billing as a team with quality options throughout their 23-man squad and when the players on the bench were called on by Joachim Loew in the final, they made the difference.

Loew’s problems on Sunday began before a ball had been kicked as key midfielder Sami Khedira suffered a calf injury during the warm-up and was forced to pull out of the game.

If there is one player in the German midfield who is difficult to replace it is the Real Madrid man who gives defensive support to Bastian Schweinsteiger while providing the intelligent calmness to compliment the energy of those around him.

Loew asked Christoph Kramer, a more typically defensive midfielder, to step in, and surprisingly the 23-year-old found himself making several bursts forward in the early stages.

Even with the inexperienced Borussia Moenchengladbach player, who only made his international debut in May, in an unfamiliar role, the midfield set-up looked to be operating well until another setback for Loew when Kramer was forced off with concussion in the 31st minute.

Lesser teams might have been thrown off course by such bad luck but with winger Andre Schuerrle on for Kramer and Mesut Ozil slotting into a deeper role, Germany adapted well.

Argentina coach Alejandro Sabella made a surprise switch at the break, taking off the lively Ezequiel Lavezzi for Sergio Aguero in a bid to give more attacking support to Messi, who looked short of energy and lacking inspiration.

But Aguero, who has battled fitness problems of his own during the tournament, looked off the pace and lacking the sharp movement and close touches that he can show at his best.

Gonzalo Higuain, who had missed a great opportunity to open the scoring in the first half, made way for Rodrigo Palacio in the 78th but the Inter Milan forward only managed to further frustrate Messi as several promising attacks broke down. Palacio also failed to make the most of a promising chance in extra-time.

Although Enzo Perez performed decently, Argentina sorely missed the impact of Angel Di Maria, who sat out the final two games of the tournament with a thigh injury and Sabella had no replacement capable of providing an attacking threat on the flanks.

Sabella might now wonder whether it would have been worth including Carlos Tevez in his squad, despite his questionable influence on the dressing-room.

With the game seven minutes away from a penalty shootout, Germany’s two substitutes combined to create the winner, yet another example in the tournament of players coming off the bench to score vital goals.

Schuerrle burst down the left flank and found Goetze who chested and volleyed home brilliantly on the turn.

Deserved champions having played an energetic and enterprising brand of football throughout the knockout stages, Germany look to have a squad – and a generation of players – capable of keeping them at the top of the world game for several years.

Taekwondo star: ‘My coach hit me’