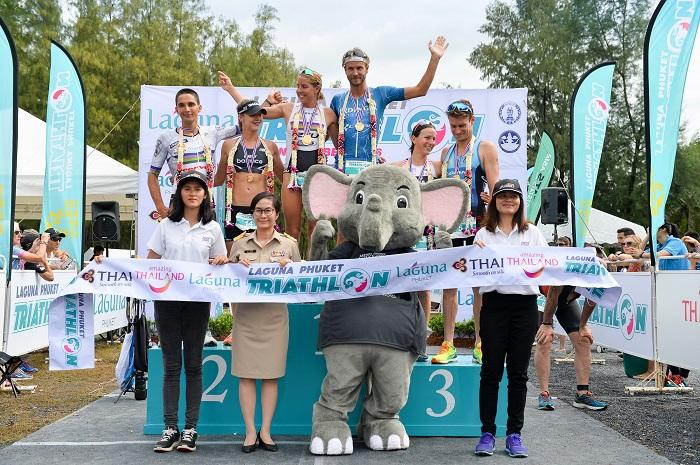 PHUKET: German athlete Michael Raelert finished first at the 23rd annual Laguna Phuket Triathlon yesterday, completing the 1.8km swim, 50km bike race and 12km run in 2 hours, 19 minutes and 13 seconds – beating his own record by 11 minutes, which he set when he won the contest last year.

The first across the line in the women’s category, 17 minutes after Raelert, was New Zealander and Laguna Triathlon first timer Amelia Rose Watkinson, who crossed the finish line in 2 hours, 36 minutes and 29 seconds. Yesterday’s win for Ms Watkinson was her ninth out of 10 races this year.

Ms Watkinson dropped by the Gazette Radio studio to talk about the LPT on Saturday, and you can hear that interview again today in the News Room from 6pm. (Listen here).

Second in the women’s division was World Duathlon Champion Emma Pallant from Great Britain (02:42:30), followed by Radka Vodickova of the Czech Republic (02:43:22), who has won three Laguna Phuket Triathlons before.

After his win, Mr Raelert said he was ‘very happy with the race’. “It’s fantastic. Definitely I’ll return. I love it here in Phuket,” he said.

Ms Watkinson has been training in Thailand since March and this year’s Laguna Phuket Triathlon was her first race in Thailand. “I am excited to be here. The weather is quite nice, not too hot but still with high humidity. I tried to keep pushing, especially on the bike course and those hills so that it’s not too hard on the run leg,” she said.

“I will spend this holidays season back in New Zealand and I will return to Thailand next year to train, and definitely defend my title at the next Laguna Phuket Triathlon,” she said.

Altogether 1,100 individual pro and age-group athletes of more than 40 nationalities competed in Sunday’s triathlon as well as 55 relay teams and many more in the 6km fun run.

First for Thailand was Jaray Jearanai (02:38:48) while Artiwara Kongmalai, Thailand’s number one rock star best known for his stage name “Toon Bodyslam” finished his individual race in 03:54:07. Thai champion in the women’s filed was Nichakarn Ruttanaporn, came in 03:12:43.