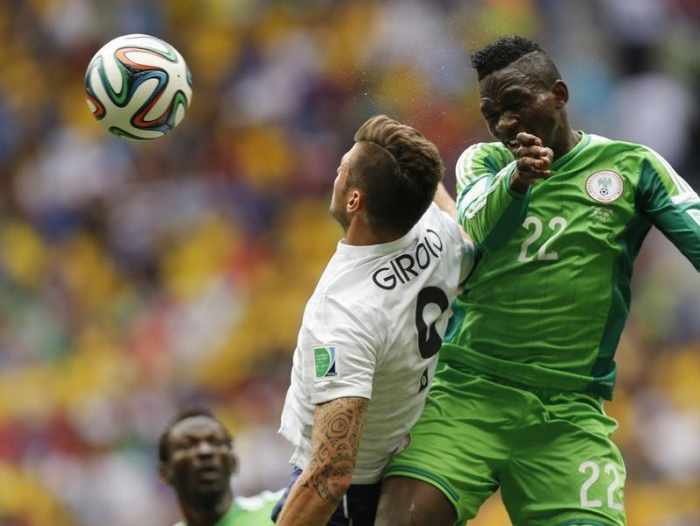 PHUKET: Germany and France snuffed out African hopes and reached the World Cup quarter-finals on Monday with hard-won victories over Algeria and Nigeria, while Uruguay striker Luis Suarez broke his silence to apologise for biting.

Both European powerhouses struggled for their wins, France needing late goals to see off African champions Nigeria 2-0 and Germany only securing their 2-1 victory over Algeria in extra time.

Germany and France will meet in the last eight on Friday, while disappointed Africans have no teams left to support.

In Porto Alegre, the sides were deadlocked 0-0 after 90 minutes in a frantic end-to-end match where Algeria goalkeeper Rais Mbolhi pulled off some fantastic saves but swiftly counter-attacks also gave the north Africans chances to win.

With the score 0-0 at full time, German substitute Andre Schuerrle deftly flicked in a low cross, before Mesut Ozil added a second in the last minute.

There was still time for an Algerian consolation goal, by Abdelmoumene Djabou. It was no more than they deserved but not enough to prevent heartbreak at the final whistle.

“The Algerians did a good job, they disrupted us from the start and didn’t let us get into our game. But it doesn’t matter how we won,” Schuerrle said.

The result kept Germany’s enviable record of reaching at least the quarter-finals in every World Cup they have played in since 1938. It also denied Algeria revenge for a dark chapter in 1982 when, despite beating then West Germany, they went out after a seemingly contrived result between the Germans and Austria.

“We showed the whole world that Algeria has a great team,” defender Madjid Bougherra said. “We fought all the way. At the start of Ramadan, we did a great job representing Algeria.”

Earlier in Brasilia, France, seeking to make up for a humiliating early exit four years ago, left it late to break down a tough Nigeria, scoring twice in the last 11 minutes.

‘Super Eagles’ goalkeeper Vincent Enyeama, who had been excellent until then, flapped at a corner in the 79th minute, leaving Paul Pogba an open goal to head into after French pressure had built steadily in the second half.

“To score a goal for your country, especially in an important match like this to get into the World Cup quarter-finals, it’s one of the best moments of my life,” an elated Pogba said.

‘Les Bleus’ struck again at the death when Nigeria defender Joseph Yobo skewed a cross into his own goal.

Nigeria, who have never progressed beyond the last 16, had the better of the first half in a rough game that swung France’s way after the African side’s influential midfielder Ogenyi Onazi was injured and carried off following a late studs-up tackle by Blaise Matuidi.

Monday’s goals took the tally for the tournament to 150, surpassing the 145 scored in the entire 2010 World Cup.

Off the pitch, it was again Suarez making the headlines – though this time for the right reasons.

In a contrite statement from his home in Uruguay, the volatile striker said he had time to reflect on his biting of an Italian defender.

“I ask for the forgiveness of Giorgio Chiellini and all the football family,” he said. “I publicly promise that an incident like that will never occur again with my involvement.”

Nevertheless, Uruguay’s President Jose Mujica upped the ante over the saga, calling FIFA bosses “sons of bitches” for giving a “fascist” punishment of a four-month football ban to Suarez.

Controversy also swirled over another forward seldom out of the headlines, Dutchman Arjen Robben.

All of Mexico was still fuming at Robben’s tumble that earned a last-ditch penalty to put the Netherlands through on Sunday.

Mexican fans excoriated and mocked him mercilessly on social media, some depicting an arm-flailing Robben leaping into the sea off rocks at a famous diving spot in Acapulco.

Robben, 30, fanned the controversy further by insisting the tackle from Mexican captain Rafael Marquez was a penalty, but confessing he had dived in another incident.

“I am an honest guy, I am a straight guy, that’s my personality and I apologise for what happened in the first half.”

FIFA said there was unlikely to be any retrospective action, drawing accusations of hypocrisy given the punishment to Suarez.

There was a one-match ban for another miscreant, Brazil’s senior press official Rodrigo Paiva who was involved in a half-time scuffle with Chilean striker Mauricio Pinilla in the last-16 clash.

The fallout from Ghana’s disastrous World Cup continued, with midfielder Kevin-Prince Boateng saying preparations had been a “nightmare”. Ghana exited with one point in three games and Boateng was suspended for a row with his coach.

“I would have never thought a World Cup preparation could be organised that badly. Everything was amateurish,” he said.

Belgium’s young side are an outside bet for the title and certainly favourites to beat the United States, but Jurgen Klinsmann has his charges fired up and super-fit.

A Lionel Messi-led Argentina should have little trouble dispatching Switzerland, but underdogs have thrown plenty of surprises in this most fascinating of World Cups.

All World Cup matches to be aired: NBTC