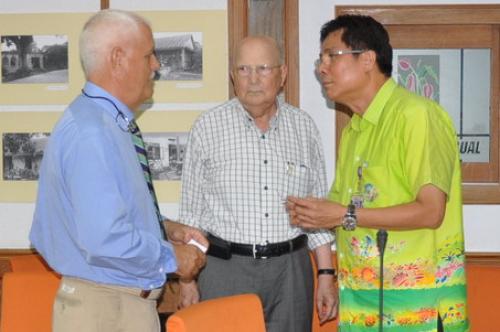 PHUKET: The German honorary consuls for Phuket and Chiang Mai yesterday urged tourists to take out adequate travel insurance before travelling to Thailand.

German honorary consuls Dirk Naumann (Phuket) and Hagen Dirksen (Chiang Mai) handed over a cheque for 100,000 baht to Vachira Phuket Hospital yesterday in appreciation for the facility providing medical services to travellers who were unable to pay for their treatment.

“Vachira is the only hospital in the South we donate to. We have made similar donations in Chiang Mai, Pattaya and Bangkok,” said Mr Dirksen.

The donation was made on behalf of Bangkok-based The German Help foundation*, which provides assistance to German nationals in need of assistance while travelling in Thailand.

“The aim of the donation is to express our appreciation for the support and cooperation of the hospital in helping foreigners, and German nationals in particular,” Mr Dirksen said.

“On behalf of the German government, I can only ask my countrymen to be prepared when they go overseas,” he said.

“If they like to live or travel overseas, they should have travel insurance or health insurance. Otherwise, they must have a big bank account balance in case anything happens,” he explained.

“Here in Thailand, and elsewhere, travellers will be asked to pay for any expenses incurred,” Mr Dirksen said.

The issue of the Thai government footing the bill for tourists’ healthcare last month prompted Public Health Minister Pradit Sinthawanarong to float the idea of compulsory travel insurance for all tourists visiting Thailand, as is required for the Schengen visa to European countries.

Compulsory insurance could be regulated through tour agencies, added to ticket prices of all inbound flights and even offered at Immigration checkpoints, Mr Pradit said.