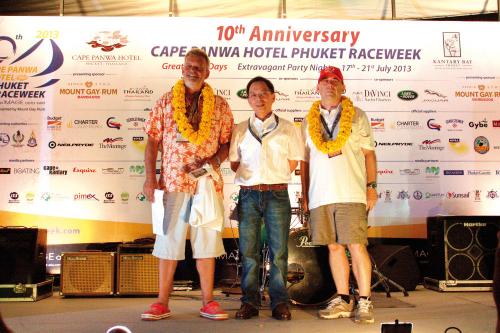 PHUKET: Media Business Services (MBS), led by Byron and Kanyarat Jones, have been announced as the new owners and rights holders of the Cape Panwa Hotel Phuket Raceweek.

The news was broken at the closing party and Gala Dinner of the highly successful 2013 Cape Panwa Hotel Phuket Raceweek. Founder and now former rights holder Grenville Fordham of Image Asia Events made the handover official in front of 500 sailors, VIPs, guests and the media.

“I’m very happy with how Raceweek has grown over the years and I am proud of what I and the Image Asia team have achieved,” said Mr Fordham, Managing Director of
Image Asia Events.

“For myself, it is time to move on and in looking for someone to take the regatta forward I could not have found better than the Media Business Services team. Byron and Khun Kanyarat have been very hands-on co-organizing this year’s event and have done a great job. They now know what’s involved from beginning to end to make this regatta work, and I have full confidence in them continuing its tradition of success.”

Looking to the future, Mr Jones, MD of MBS, said, “We are very excited to be entrusted with the future of Cape Panwa Hotel Phuket Raceweek. We are not actually new to the event, having been a media partner for a number of years through our other business, 91.5FM Phuket Island Radio, and having worked closely with Grenville and the Image Asia Events team in a co-organizer capacity this year.”

“We are aware of what makes this event such a success and judging by the feedback at the closing party and since, 2013 was one of the most successful yet. We won’t be changing an award-winning formula, more contributing some new ideas and developments that we believe will make the event an even more enjoyable experience for all involved.”