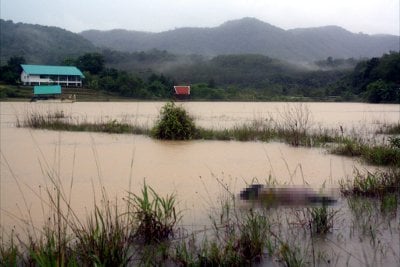 PHUKET: Phuket Police are investigating the drowning death of a 60-year-old man found floating face-down in a tin mine pond in Thalang late yesterday afternoon.

The discovery of the body was reported to Thalang Police at 5:30pm by a roommate of the deceased who gave his name only as “Gai”.

Mr Gai told investigators he went looking for his friend, Waan Nantaphrom, after he failed to return from a fishing trip to the pond behind the Tah Reua Temple on Wednesday.

Mr Waan was employed by the Hok Huad Company as a gardener and home handyman.

He and Mr Waan drank alcohol together until 10pm on Tuesday night before going to bed, Mr Gai told police.

The following morning, Mr Waan woke up early and went out to the pond in search of fish. He failed to return that evening.

The following afternoon Mr Gai went in search of his missing friend and found his bloated body floating face down in shallow water near the bank of the pond.

He notified police, who arrived with Phuket Kusoldharm Foundation workers just before dusk to recover the body.

Police said there were no signs of assault to the body or other indications of foul play. They suspect that Mr Waan may have fainted while in the water and drowned.

However, they asked rescue workers to transport the body to Thalang Hospital for further examination.

The body will remain in storage at the hospital until it is claimed by relatives.