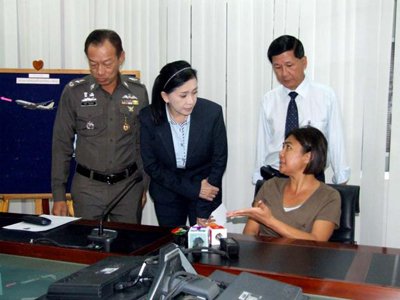 Transvestites, women warned against sex trade in Mideast
Phuket Gazette / The Nation
PHUKET: Many Thai male cross-dressers get legitimate jobs in Oman as masseuses but choose to also offer sexual services on the side, a Thai embassy official in Muscat said

Panida Somao said the laws in Oman were very strict and only men were allowed to work at massage parlors for male customers.

“But some Thai transvestites have exploited these laws and also offer sexual services,” she said, adding that many came to Oman before undergoing the sex-change operation.

“Many of them work in Oman to earn enough money to finance this operation,” Panida said.

“Those who have already undergone the sex-change operation want to save money for cosmetic surgery so that they can enter beauty pageants.”

She said a Thai transvestite usually charged 2,000 to 5,000 baht per hour for services in Oman, but this comes with huge risks.

“When they get sexually transmitted diseases, they can’t go see a doctor because the society here is not open about this,” Panida explained.

She added that last year, two Thai transvestites had to seek help from the embassy because they needed urgent medical attention.

In Bahrain, another embassy official warned Thai women against choosing the wrong path for the sake of money.

Thatree Chauvachata, counselor at the Thai embassy in the Bahraini capital of Manama, said several Thai women willingly headed to Bahrain in the hope of making money from prostitution but usually ended up living in ‘hell’.

“They lose all their freedom and have to serve all sorts of people arranged by their agents,” he said.

He was speaking after Bahraini authorities recently arrested 10 Thai women on charges of prostitution. Of them, three have been released because they were victims of human trafficking, while the remainder confessed that they had decided to enter the flesh trade for money.

“Many of those who entered the trade willingly regret their decision,” Thatree said.

He said those willing to join the sex trade could choose the 300,000 or the 500,000 baht package before entering Bahrain.

The packages, he said, covered their air tickets and assurance that they can pass through the immigration procedure. The more expensive package includes a work visa that can allow them to work legitimately as a waitress or hairdresser, he said.

“After these women land on Bahraini soil, they have to stay in premises provided by their agents. They cannot touch the money or leave the room until they have paid all the expenses of the trip,” Thatree said.

He said that though these women can earn about 3,000 to 4,000 baht per hour, it would take them about six months to repay all their debts. “They have no choice and have to serve customers who have different sexual needs or tastes,” he said, adding that these women also risk legal punishment.

Thatree also informed The Nation that six Thai women are serving jail sentences in Bahrain for prostitution convictions, while some 16 others are awaiting court trial on similar charges.

The three women found to be human-trafficking victims were allowed to board a flight to Thailand from Bahrain yesterday.