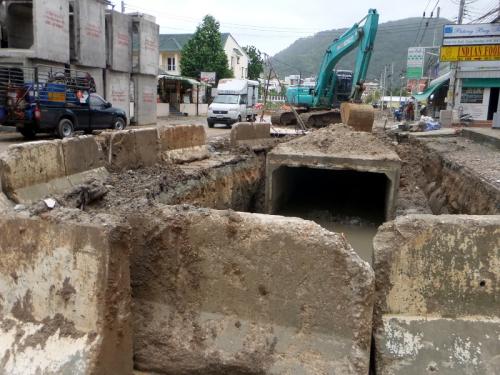 PHUKET: Despite what the Director of the Department of Rural Roads Phuket office told the Phuket Gazette yesterday (story here), officials jumped into action to barricade a giant hole in Phang Muang Sai Kor Road in Patong after two motorbike riders found themselves over their heads in water and their motorbikes marooned at the bottom of the pit.

The hole was part of the works in progress to install large storm drains under the entire two kilometer length of road.

The pit – marked with one Reduce Speed sign and a single standing steel rail barrier – measured at least two meters deep, several meters across and about 10 meters long.

“After hearing what happened to the two motorcyclists on Sunday, I called in the relevant officers and the construction company [responsible for installing the drains and resurfacing the road].

“I reiterated the need to install more safety features, such as lights and signs. I apologize for this problem, which has caused physical and property damage,” Teeraporn Jirarattanakorn, Director of the Department of Rural Roads Phuket office, said today.

More sections of the large storm drains have already been lifted into the trench and the large gaps beside the drains have been filled with earth.

The entire hazard has also been blocked off by a battery of concrete barriers and safety signs to ensure no other unsuspecting motorists have any similar issues.

Mr Teeraporn pointed out that the long-awaited improvements to Phang Muang Sai Kor Road are far behind schedule.

“On June 28, Kosin Pittayavestsoonthon, the Director of the Bureau of Road Construction, will come from Bangkok to inspect the progress made,” he added.

US Embassy consular outreach in Phuket