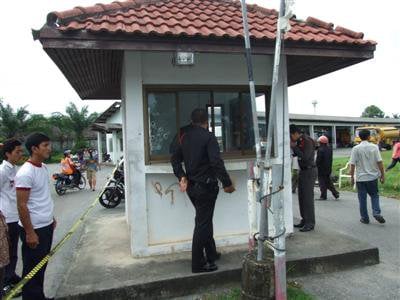 PHUKET: After standing up to a gang of young thugs, a security guard was gunned down at a municipal parking lot in Phuket yesterday.

Phuket City Police were notified of the murder at 7:40am by residents at the new government workers’ housing complex off Rattanakosin 200 Pi Road in Wichit.

Slumped over in a plastic chair inside the guard booth at the entrance was the body of 54-year-old Winai Buathongkham, a resident of Phuket Town.

Mr Winai died from a single bullet that entered his skull at the base of the ear.

Evidence at the scene, including spent casings and bullet holes, indicated that at least nine shots were fired in the attack.

Police believe the murder was carried out by a gang of young thugs who are well known to police and local residents for criminal activities including car theft, motorbike theft and siphoning petrol from vehicles.

Residents saw the gang near the guard booth last night hurling insults at Mr Winai, who stood his ground.

Later, at about 11pm, they heard loud noises outside but dismissed them as firecrackers and did not go out to investigate, they said.

The following morning one of the residents noticed no security guard was on duty, then looked inside the guard booth and discovered Mr Winai’s body.

Mr Winai was an employee of the Petch Raksa Kwamprodpai Co Ltd (“Diamond Safety Maintenance”) security company, which took over the contract to provide security in the area at the start of October following many complaints about crime by local residents.

He stood up to the gang members by denying access to the parking lot to anyone who was not a resident, they said.

Police said the identities of the gang members are well known and a request for arrest warrants has already been submitted to the Court.