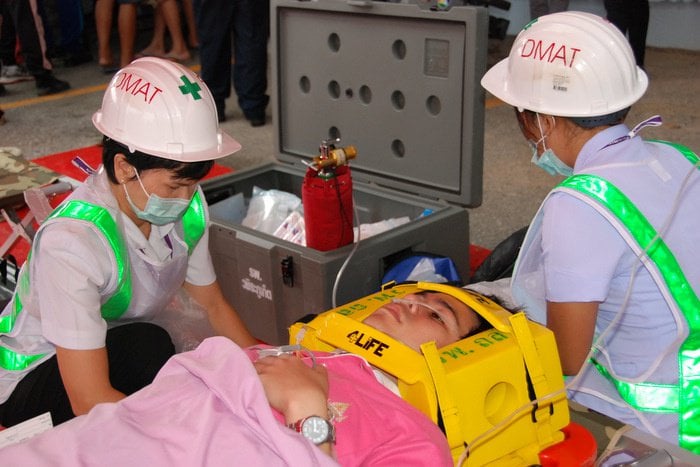 PHUKET: The full-scale tsunami evacuation and emergency-response drill scheduled to be held today on Koh Sireh, on the east side of Phuket Town, has been postponed to May 19.

The decision to postpone the event was made last week, said Santhawat Riwleung, chief of the Phuket office of the Department of Disaster Prevention and Mitigation (DDPM).

The earthquakes that shook Phuket today and yesterday (stories here, here and here) played no part in the decision, he added.

“This has nothing to do with the earthquakes,” Mr Santhawat told the Phuket Gazette. “Many of the local people are sea gypsies, and they have been busy preparing for a traditional festival.

“The locals were not ready. The government officers were not ready after the long holidays over the weekend, and the big event to hand over donations for the victims of the earthquake in Nepal [story here] was scheduled for today, so we pushed the date back to May 19.”

The traditional festival the sea gypsies were busy with was Loy Reua, a celebration held twice a year to honor their goddess of the sea. The festival, held last Friday, is regarded as an important cultural event in Phuket, and has been heralded as one of the key events to be maintained in order to preserve sea gypsy tradition (story here).

This is the second time the annual full-scale drill has been postponed.

The exercise was originally slated to be held on Christmas Day last year (story here), but was later postponed due to sensitivities over the exercise being held one day before the 10-year anniversary of the disaster of 2004 (story here).

“We will go ahead with our briefing of local residents and officials at Baan Koh Sireh School, as scheduled,” Mr Santhawat said. “The session aims to educate local agencies and residents taking part in the drill of their roles and responsibilities in the exercise, and to learn how to communicate with each other.”

The drill on May 19 will proceed as previously announced (story here), he added.

“The exercise will start at 9am,” Mr Santhawat said.