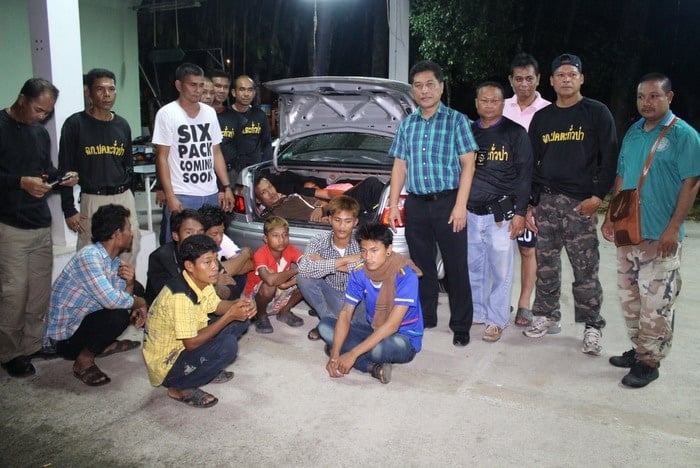 PHUKET: A Thai national was arrested for attempting to smuggle 10 illegal Myanmar laborers through a checkpoint in Phang Nga last night.

Ranong native Pidech Janjue, 36, had picked up the illegal workers at a fishing port in Phang Nga’s Kuraburi district and was transporting them through Takuapa district to the Khok Kloi bus station. From there, the group was headed to Chumphon Province. However, police have yet to establish what kind of work the men would be hired to do there.

“Mr Pidech knew there was a checkpoint ahead, so he parked his car about 500 meters before it. At that point, he let seven workers out of his car. They were made to wait in a palm tree forest near the road,” Takuapa District Chief Manit Pianthong told the Phuket Gazette.

“The other three were then told to lie in the trunk so the car would not be stopped by police. After passing through the checkpoint, Mr Pidech dropped off the workers at the entrance of Bor Hin waterfall, where they waited until he picked up the other workers.”

Mr Pidech made two more similar trips through the checkpoint, bringing three workers in the second trip and the last four in the third.

“However, local residents in the area took notice of the suspicious behavior near the waterfall, so they notified police,” said Mr Manit.

“After Mr Pidech returned to the waterfall with the last four workers, district officers showed up at the scene.”

When Mr Pidech saw the authorities, he fled in his car, leaving the 10 workers behind, Mr Manit explained.

Mr Pidech told police that he had been hired by a man, known only as ‘Bang’, to pick up the workers from the fishing port and transport them to the bus station.

“Mr Pidech admitted that he was paid 2,300 baht per person,” said Mr Manit.

All 10 workers were charged with illegally entering Thailand. Mr Pidech was charged for smuggling illegal workers into Thailand.

Mr Pidech could face a maximum penalty of a 100,000-baht fine, 10 years in prison or both, confirmed Lt Col Sarwavudh Soonsanga of the Takuapa Police.

All suspects have been taken to Takuapa Police Station for further questioning.