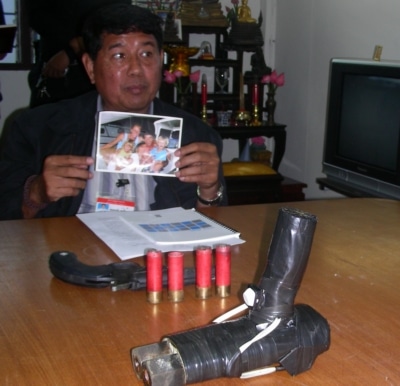 KARON: Chalong Police are investigating the bizarre killing, apparently in self-defense, of an unknown frogman who attacked a Swiss yacht owner and a Thai woman late Wednesday night.

The details of the case, as provided to the media at a press conference yesterday afternoon by Chalong Police Superintendent Col Saman Chainarong, are based on the eye-witness account of 25-year-old Trat native Porntip Pradit.

Col Samarn told the media that K. Porntip called police about 11:30 pm on Wednesday from a yacht anchored about 500 meters offshore from the Club Med Resort at Kata Beach.

Speaking in a panicked voice, she told police that Swiss national Pierre-Alain Oberson, 50, who had been shot in his left shoulder, was in urgent need of medical assistance, Col Samarn said.

Chalong Police responded to the distress call by arranging for a longtail boat to take them to the vessel.

K. Porntip fired three flares from the boat to inform police of her location.

Mr Oberson was rushed to Phuket International Hospital, where he remains in the Intensive Care Unit.

It will be at least five days before he can be questioned, Col Samarn said.

About 70 meters from the vessel, police recovered the body of a lightly bearded, middle-aged Caucasian male wearing a black diving suit, complete with swim goggles and fins. He had sustained two large wounds: one to his left eye and the other to his left wrist.

Doctors at Vachira Phuket Hospital had confirmed that the cause of death was blood loss from the wound to his wrist, Col Samarn said.

He explained that under questioning K. Porntip had told police that she and Mr Oberson were aboard the yacht that night when they noticed a man with a bag swimming toward the vessel.

Intrigued, they began to talk with the man and then invited him aboard. The man said he enjoyed swimming and diving at night, he said.

The man remained aboard for about one hour, during which time the group drank beer and coffee together while the man inspected the vessel. “He stayed about one hour and then said, ‘I have to go.’ Then he said goodbye,” Col Samarn quoted the woman as saying.

Rather than leave, the man reached into his bag and pulled out a homemade gun and a knife. With the gun in one hand and the knife in the other, the man ordered K. Porntip to tie up Mr Oberson with rope and gag him with black electrical tape, said Col Samarn.

As she began to do so, both she and Mr Oberson exchanged glances before simultaneously charging at the man. In the ensuing fight, the man was hit twice by Mr Oberson with a boat hook, he added.

The man then fired his gun once, hitting Mr Oberson in his left shoulder, before jumping overboard.

Police are still seeking leads to discover the identity of the intruder and are especially interested in his homemade gun, recovered from the seabed by Marine Police around noon yesterday.

As the gun was unlike any they had seen before – it fired with a switch rather than a conventional trigger – they suspect the man may have been a weapons expert and will contact Interpol to see if his description matches the profile of a known international terrorist, Col Samarn said.

Immigration are also trying to identify the man, he said.

Anyone with information that could help in his identification is urged to contact Capt Theerawut Thep-Luen at Chalong Police Station, he added.

Col Samarn said that Mr Oberson had come to Thailand with his wife and two young children, a boy and a girl, all three of whom were staying at a resort on Koh Racha Yai when the incident took place, he said.

Suspicious that the unknown diver might have been the same man who robbed the Karon branch of Siam Commercial Bank of 420,000 baht last June, police presented photos of the man to staff there.

He did not fit the description of the bank robber, Col Samarn said.