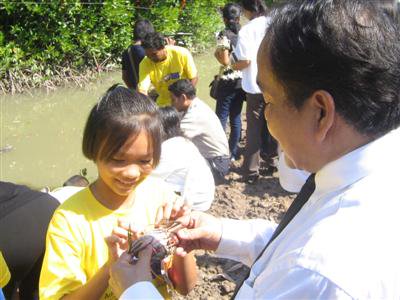 RASSADA: In a bid to increase dwindling crab stocks in local waters, the Phuket Provincial Fisheries Office with other government and non-government organizations this morning held a ceremony to launch the island’s first “crab bank”, off the coast of Rassada Village 3.

As part of the ceremony, nine monks blessed 250 saffron ribbons, which were tied around mangrove trees lining the perimeter of the 300-rai Soi Kingkaew Community Mangrove Forest to ward off would-be encroachers.

A total of 800 such ribbons will be tied to mark the entire boundary soon.

The 151,160-baht project was funded by the Governor’s Office last year as part of the central government’s Yoo Dee Mee Suk (Good Life and Happiness) Project.

It is also supported by Hilfswerk Austria as one of the Austrian Development Cooperation’s community-based, post-tsunami rehabilitation projects.

The Rassada Crab Bank comprises four pens floating about one kilometer offshore. The first “deposit” consisted of about 100 egg-carrying female crabs from Phang Nga, all of them the locally, commercially important species of horse crab Portunus pelagicus, phu mah in Thai.

Local fishermen, of which form a fleet of about 20 boats, will deposit any ovulating females they catch in the pen to allow them to reproduce. After the crabs have reproduced, they will be sold off.

Currently, fresh phu mah sells at about 280 baht per kilo, but even at this price fewer and fewer Rassada fishermen have found it worthwhile trying to catch them because of dwindling catches.

It is hoped the crab bank will help restore the once healthy population of the crabs in local waters.

Some 1,000 black crabs were also released into the klong surrounding the mangrove forest as part of this morning’s activities.