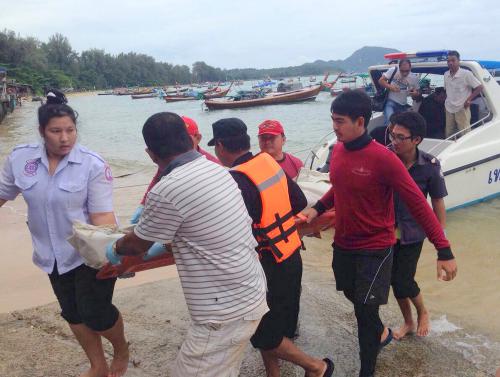 PHUKET: The parents of Chinese national and Singaporean student Gao Yang, who slipped from the rocks at Phuket’s Promthep Cape late Wednesday afternoon, are on their way to the island.

“We expect them to arrive in Phuket tomorrow or Sunday,” Qin Jian, Vice Consul of the Consulate-General of the People’s Republic of China, told the Phuket Gazette this afternoon.

A speedboat returning from dropping tourists off at Koh Hei this morning reported the grisly discovery of a body floating about seven kilometers south of Phuket. Police suspect that the body is that of Gao Yang, 20 (story here).

The body was recovered and taken to Vachira Phuket Hospital.

Mr Gao’s three friends who were with him at Promthep Cape when he fell into the sea attempted to identify their friend.

“They could not identify the body due to the condition it was in,” said Mr Qin.

“However, the friends confirmed that the t-shirt on the body was the same shirt Mr Gao was wearing when he went missing,” he said.

The four friends are exchange students at a university in Singapore, Mr Qin noted.

“They are studying there for only a short time,” he added.

“When the parents arrive, we will have our staff accompany them to view the body,” Mr Qin assured.

“If they identify and accept the body as that of their son, then at least there will be some closure to this sad incident,” he said.