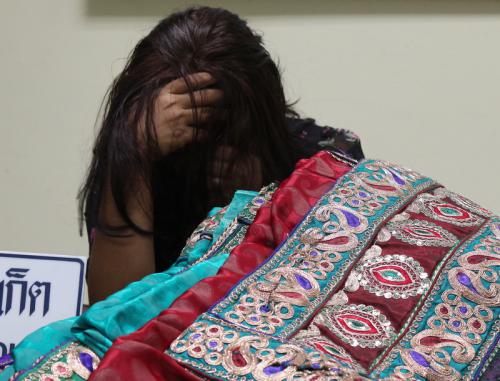 “When Ms Lalchhuanthangi’s suitcase went through the x-ray machine our officers were suspicious, as it showed up all black inside – making it likely that it was constructed to hide things,” said Phuket Airport Customs Director Montira Cherchoo, who headed the press conference along with Phuket Governor Maitri Inthusut.

“The suitcase was also suspiciously heavy, 19kg, given its size,” she added.

On searching Ms Lalchhuanthangi’s luggage, officers uncovered 11 bags of ya ice wrapped in black plastic and stuffed into to tea tins. Additionally, they found 62 cloth bags containing ya ice hidden among the saris and other pieces of clothing in the bag.

Officials estimate that the drugs have a street value of 15 million baht.

Ms Lalchhuanthangi confessed to police that she boarded a plane in Delhi just before 1am yesterday morning with the intent of smuggling the drugs into Phuket. She told police that she was paid 100,000 rupees (about 50,000 baht), and was supposed to be met at Phuket Airport by a Thai connection.

Tah Chat Chai Police charged Ms Lalchhuanthangi with possession and trafficking of a category 1 narcotic with intent to sell.