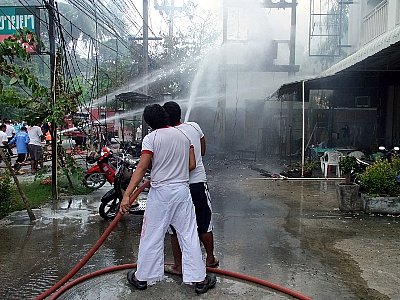 PHUKET: The explosion of an electrical transformer in Phuket this afternoon incinerated a noodle vendor’s cart, injured a woman, and damaged several vehicles.

The fire followed the explosion of a transformer in front of a townhouse project across from the Ocean View Phuket Hotel on Sirirat Road, which runs from Patong to Karon.

Roadside noodle vendor Kanjana Sonjai, 29, said, “My aunt and I were making noodles next to the transformer at about 2pm when it suddenly exploded. The cover flew off and nearly hit my aunt’s right arm. I pulled her away just in time. Within seconds the entire noodle cart was engulfed in flames.”

Her aunt is now being treated at Patong Hospital, Ms Kanjana said.

It was the third and largest of three explosions from electrical equipment on the same concrete support structure today, local residents said.

Staff of the nearby JR Massage shop, located in the shophouse complex behind the transformer, said smaller explosions were heard at 8am and again at 10am, after which electricians arrived to make repairs.

A laundress who operates a shop nearby said the repairmen left at about 1pm; then the transformer gave off smoke until it suddenly blew up and burst into flames.

“I ran out off my laundry shop right away,” she said.

Although the fire was reported immediately, it took firefighters over an hour to arrive, she said.

Six motorbikes and a Honda Jazz were damaged by the fire.

However, staff at Patong Municipality’s Division of Disaster Prevention and Mitigation said they were only informed of the fire at around 2.30pm and arrived within five minutes.

It took 14 officers with three fire trucks about 20 minutes to extinguish the flames, after which they cut off the power supply to the pole, they said.

Although it was more than 250 years ago that Benjamin Franklin flew his kite, provincial Thailand has yet to develop any credibility in the effective or safe management of electricity.