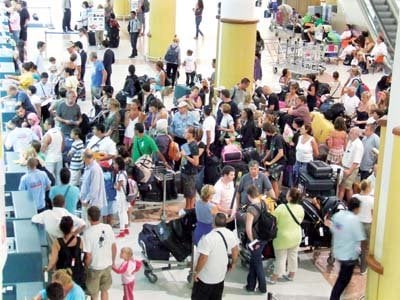 As arrivals to Asia’s leading resort destination in the first half of the year increased 20% over the same period in 2010 and an unprecedented number of new hotel rooms opened, sagging infrastructure is creating a widespread danger to the island’s tourism industry.

In the changing dynamic of guest demographics the Patong area, which accounts for 35% of the 43,571 accommodation rooms on the island, has edged into the mainstream. Patong-wide occupancy hit 82% in the first half of the year, with China and Russia now taking a quarter share of the market.

Numbers are straining the handling capacity of the airport, with Airports of Thailand (AoT) expecting a throughput of 7.95 million passengers (arrivals and departures combined) this year, which will exceed the stated capacity (6.5 million) by 22%.

A US$ 164 million expansion plan that will increase handling to 12.5 million by 2014 will only see the start construction next year, and tourism operators are increasingly concerned over mounting delays by travelers.

First-half hotel trading by volume markets saw a surge in Phuket’s average occupancy across all hotel tiers, to 73%. Key market Revenue per Available Room (RevPAR) moved up to its highest level since the global financial crisis in 2008.

Somehow, Phuket has gone into a retro stage where tour groups, wholesalers and the mass movement of visitors are once again the norm rather than the exception.

A leading indicator in the cyclical development was shown in 2010 when charter flights hit their highest-ever level, equating to a 153% increase in year-on-year growth.

Commenting on a steady rise in airlift, Laguna Resorts and Hotels Plc Managing Director Michael Ayling said, “The increase in the number of direct flights into Phuket is resulting in better accessibility and affordability of travel to the destination.

As long as the infrastructure keeps pace with the increased numbers of tourists, expansion of hotels and faculties that are well planned and implemented, the hotels will be able to properly manage their room rates in line with supply and demand.”

Investment in Phuket’s hospitality sector brings strong, positive business sentiment with a supply pipeline for the island of 6,968 rooms. This will see an increase of 16% by the end of 2014.

As the northern part of the island is preparing for work to start on the new International Convention and Exhibition Center, Minor International’s Bill Heinecke says, “We have reviewed opportunities to expand our very successful Anantara Vacation Club and Mai Khao is the destination of choice for a new 100-key resort that is set to open in late 2012.”

Looking toward the future, increasingly, the number of existing hotels will face the necessity to upgrade, rebrand, or downgrade market position while transaction activity is expected to remain active.

In this business, either you move forward or go backwards; there is no standing still.

Unfortunately, progress now faces increasing waiting time and delays at the island’s international gateway, and progress by the tourism industry could be derailed without a greater sense of urgency by AoT and Immigration officials.

Bill Barnett is Managing Director of C9 Hotelworks and can be contacted through c9hotelworks.com