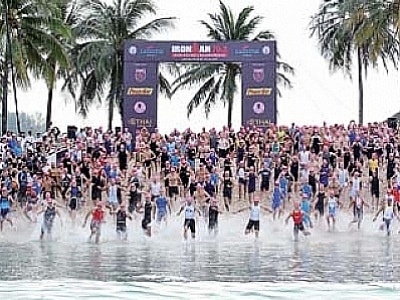 Laguna is one of only three worldwide Ironman 70.3 triathlons to offer 2012 Kona slots and the only one in Asia-Pacific.

The legendary Ironman World Championship in Kailua-Kona, contested each October on a lava landscape course and considered one of the world’s toughest, is regarded as the “Holy Grail” of triathlons and participation is coveted by triathletes worldwide.

The Ironman 70.3 event will be the climax of a unique Tri-Fest on the island that begins with the Laguna Phuket Triathlon on November 27 followed by a week of triathlon-related training and social activities around the Laguna Phuket destination resort.

“Securing 30 Kona slots is a real boost for us and underlines our integration into the worldwide community of prestige top tier triathlons,” said Debbie Dionysius, Assistant Vice President of Destination Marketing for Laguna Phuket.

“These 30 Kona slots will be a major draw card for triathletes worldwide. We hope to attract more than 1,000 entries and see the cream of triathlon talent here at Laguna for what promises to be a spectacular race challenge and a unique triathlon festival,” she said.

Murphy Reinschreiber, Ironman and WTC managing director Asia-Pacific, said: “The slots are being offered to ensure ample 2012 qualifying opportunities, given the current uncertainties of our 2012 full distance race schedule. Their availability is a one-off opportunity that is sure to generate enthusiasm in the worldwide triathlon community.”

The Ironman World Championship in Kailua-Kona, originally a combination of the Waikiki Rough Water swim, the Around Oahu Bike Race and the Honolulu Marathon, is a full Ironman consisting of a 3.8 km swim, a 180.2 km bike ride and a 42.2 km run.

Ironman 70.3 triathlons such as the Ironman 70.3 Asia-Pacific Championship are half the full Ironman distance with a 1.9km swim, a 90.1km bike ride and a 21.1km run.

The Phuket Gazette is a proud sponsor of the Laguna Phuket Ironman 70.3.

Phuket’s Gov to bring illegal hotels into the fold