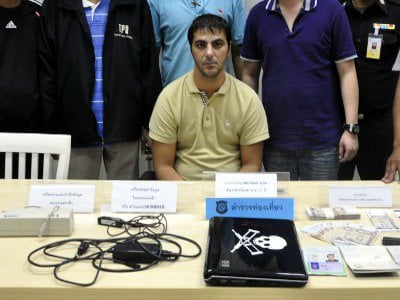 PHUKET: Phuket Tourist Police on Wednesday arrested a Frenchman for ATM card fraud in Patong, but his alleged accomplice managed to flee on foot.

The suspect, 31-year-old Rodi Yagir, was presented to the media by Tourist Police at their office in Phuket Town.

Also displayed were a variety of electronic devices including a laptop computer, a credit card “skimmer”, two USB storage drives, 130,000 baht in cash and 12 forged credit cards with account numbers and password information handwritten in pen on the backs.

Lt Col Jiraphop was informed by staff at the Siam Commercial Bank that a foreigner was making fraudulent ATM withdrawals in the area, most likely using stolen information “skimmed” from bank cards of victims.

When Mr Yagir arrived with another man, the officers introduced themselves as officers of the law.

Mr Yagir fled in the direction of Simon Cabaret, where he was finally apprehended in the parking lot.

He was escorted to his room at a local hotel, where a search uncovered the above-referenced electronics as well as a passport belonging to the alleged accomplice, identified only as Jean-Philippe, who managed to escape on foot and at last report was still at-large.

Mr Yagir has denied all charges against him, saying the equipment found in the hotel did not belong to him.

In January this year, Englishman Paul Treherne reported that he lost more than 800,000 baht in a similar ATM scam in Patong. He noted that one of the suspects in his case “sounded French”. It is not yet clear whether Mr Yagir may have been involved in that scam.