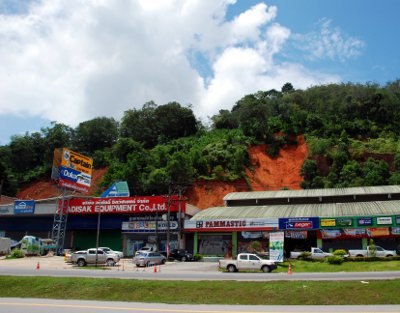 PHUKET: Residents in a landslide risk zone in Phuket have been ordered to evacuate following fears of a major slide that could bury businesses and block the bypass road.

The order followed a landslide on Wednesday morning behind the Adisak Equipment store on the bypass road northbound in Rassada.

Store owner Adisak Lertchuwongsa said, “The soil slid down suddenly at about 10am, covering six units of accommodation set up to house Burmese workers. Fortunately they were all out working and the units were unoccupied at the time,” he said.

“After that we continued to see soil and rocks sliding downhill. It happened before, about eight years ago, but not this badly. People in the neighborhood fear a major landslide,” he said.

Geologist Amnart Tantitamsopon said changes to three natural watercourses appeared to be the cause of the slide.

“We are going to have a meeting this afternoon with related authorities and the neighborhood residents to discuss a solution,” he said.

The long-term solution would probably include construction of a retaining wall 200 meters long from Adisak Equipment to the Chevrolet dealership, then terracing the soil behind and covering it with Shotcrete, he said.

What happens in the short term will depend on how much it rains before the work can begin, he said.

He estimated the soil in the risk area to be about 70% saturated this morning.

“The means that about 187,000 cubic meters of earth are at risk of landslide if rainfall saturates the soil past the critical point,” he said.

Vorakorn Lertchuwongsa, son of Mr Adisak, said his family and their workers total about 50 people.

His group is one of ten households in the risk area, he said.

Frenchman arrested for fraud in Phuket