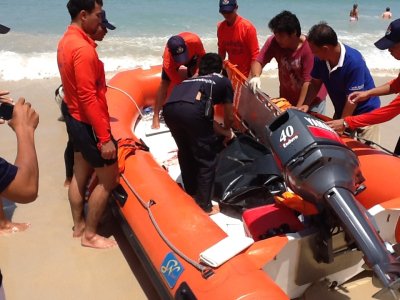 PHUKET: The body of Stephane Dacosta, a 33-year-old French national, thought to have drowned yesterday, was recovered from the waters off Freedom Beach this morning.

Mr Dacosta was reported missing at about 5pm yesterday by friends who had attempted, with the help of local fishermen, to save him after noticing the French man struggling to swim in the current.

“We checked the location where Mr Dacosta was last seen and found that a rip current crossed that area. We assume that Mr Dacosta was taken out to sea by the current,” Karon Municipality Sea Rescue Center officer Supachai Janphet told the Phuket Gazette.

This morning at 9am, officers from the Royal Thai Navy and the Tourist Rescue Unit launched two boats to search for Mr Dacosta. After more than an hour of searching they found and recovered his body.

“We found the body in five meters of water about 50 meters off-shore,” said Mr Supachai.

“It would appear that Mr Dacosta walked to Freedom Beach from Patong with seven friends, who were on holiday with him. On arrival at the beach they crossed a fence to gain access to the shore. At that time of day they and two local fishermen were the only people on the beach,” he said.

The body was taken to Vachira Hospital Phuket.