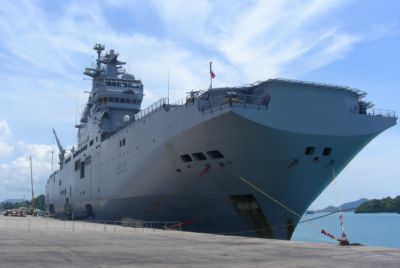 French Ambassador to Thailand Laurent Bili said that an agreement had been reached with the Burmese military government making Phuket the logistics center for French supplies heading for the Irrawaddy Delta region.

He estimated the value of the supplies, which include 400,000 kilograms of rice, at about 1 million euros.

The Burmese junta has refused to allow foreign naval carriers or air force cargo planes to enter its territorial waters or airspace.

Mistral and her crew of 180 waited in international waters before finally receiving orders to unload in Phuket. The vessel will depart Phuket today.

The French military said on Monday that the supplies would be given to the UN’s World Food Program for distribution to victims in the worst-hit areas. A UN cargo ship is scheduled to collect the aid on Saturday and deliver it to Burma by Monday.

The ship also has tents and tarpaulin sheets to provide shelter for 60,000 homeless people, as well as cooking pots, mosquito netting and other necessities.

Cyclone Nargis left an estimated 133,000 dead or missing when it struck Myanmar on May 2 and 3.

French President Nicolas Sarkozy said he found it “deeply lamentable” that the regime had prevented delivery of the humanitarian aid, which arrived off the Burmese coast 10 days ago.