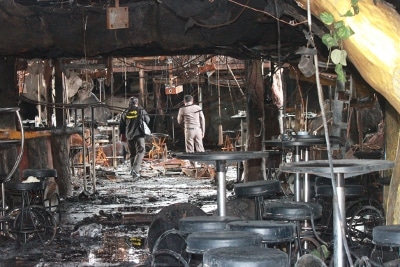 PHUKET: Rescue workers who recovered the bodies of the four people who died in the Tiger Discotheque inferno last Friday have revealed that all four bodies were found only “one to two meters” from a fire exit.

“All four of the bodies were found in front of the restrooms on the second floor, only one to two meters from a fire exit,” a volunteer worker with the Kusoldharm Rescue Foundation told the Phuket Gazette yesterday.

A police officer associated with the investigation told the Gazette that officers were aware of the information and believed that chaos caused by the fire and crowd had made it impossible for the victims to escape.

“We believe they may have just exited either the men’s or women’s restroom to find themselves facing a crowd of people running for the door [fire exit], trying to get away from the fire.

“They may have been knocked down and trampled by the crowd of people running out of the nightclub. Unable to get out of the building, they would have likely died of smoke inhalation,” he said.

The officer added that police were continuing their investigation.

“We expect to conclude our investigation within 30 days,” he said.

During an inspection of the gutted nightclub yesterday, Col Nattapol Samsen, chief of the Royal Thai Police Office of Forensic Science, confirmed to the Gazette that the death toll from the fire could not be more than four, despite widespread rumors that many more people might have been died in the blaze.

“On the morning of the fire, just hours after the blaze had been put out, officers from our Phuket branch inspected the scene very carefully. They searched the entire nightclub and found only four bodies.

“The fire burned for only one hour and it did not reach the intense temperatures required to eliminate any trace of a body. There would have been some remnants left. We would have found at least part of a bone or something similar,” Col Nattapol said.