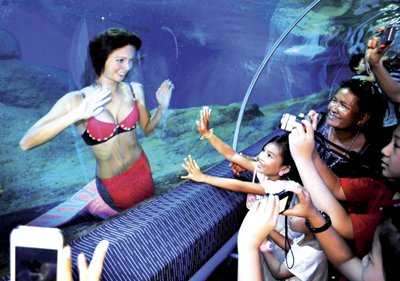 PHUKET: We all know the power of a beautiful woman. It isn’t the power of brute strength – they have a much subtler influence. Sirens can confuse even the cleverest among men.

In Homer’s The Odyssey, sirens sang an enchanted song to Odysseus and his crew. The song caused them to steer off course towards jagged cliffs – nearly colliding and sinking their boat.

I mention The Odyssey because, until now, mermaids were considered to be the stuff of legend, a wives’ tale, a fantasy – but that’s all changed. The Phuket Gazette is proud to report the first actual sighting of a mermaid, not far from Chalong Bay.

“I’m a real mermaid,” says Katrin, “When I was a child I loved being in the water and after watching Disney’s, The Little Mermaid, I knew that I wanted to be a mermaid.

“As a mermaid I’m often filmed or photographed swimming alongside the ocean’s mysterious and wonderful natural inhabitants. I don’t use any scuba equipment.”

Models participated in a mermaid master-class given by Katrin, including girls from Malaysia, Thailand, Scotland and Switzerland.

“Basically we got three diving trainers together and since we’re shooting underwater videography we’re teaching the girls how to be mermaids; how to move, how to act. You have to be careful, because you don’t have a mask and so on,” says Spencer Felton Katrin’s husband and a dive instructor at Andaman Ocean Safaris.

The mermaids are part of a public relations campaign sponsored by the Dive Tribe, which aims to promote public awareness of shark poaching in Thailand and Asia.

The six ‘mer-recruits’ had to learn basic free-diving techniques, such as how to hold their breath for at least two minutes and how to tread water with a mono-fin (mermaid tail).

Believe it or not there is actually an ever-increasing demand for these ‘mer-models’, especially at sporting events like football, says Dolphin Lee.

Dolphin runs a mermaid school in Malaysia and brought two of his models to Phuket to train and be part of the awareness campaign.

After completing training, the mermaids travelled to Pattaya for an underwater photo shoot on Her Majesty Queen Sirikit’s birthday, in a tank full of sharks.

“There were black tip reef sharks, nurse sharks and others. The girls swam around with them just to show the public they’re [the sharks] not really as dangerous as everyone thinks,” says Spencer.

The girls formed a bond over their time in the pool together and could often be overheard giggling and joking around.

“It’s been a really good experience,” says Tanja Sey, 29, a Swiss woman who took the ‘mer-course’ and works as a Dive Master in Phuket. “I’ve had a lot of fun with all the girls and doing this I can learn a lot about my scuba diving as well.

“But, I have to make sure I can tread [water] for three minutes more so [that] I can get to the gold mermaid level,” Tanja added as she flopped away. (You know they can’t be out of water very long.)

Organizers say what they like most about the mermaids is that they’re a different and more lighthearted approach towards conservation.

“In Europe people tend to have a dim view of [something like this] and here they are just like…okay,” says Spencer.