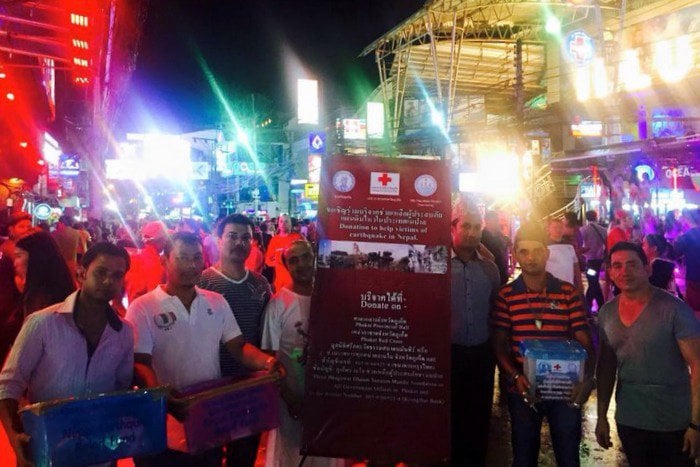 PHUKET: The Thai-Nepalese Foundation is now accepting donations of relief supplies to aid the victims of the disastrous earthquake in Nepal, the foundation’s president confirmed today.

Supplies being collected by the foundation include clothing, medicine, tents (family size), gloves and sanitary napkins.

The death toll from last Saturday’s quake has risen to 6,204, The Nation reported today (story here).

“If you have a lot of supplies and are unable to transport them to the foundation, please call us. We will arrange to pick the items up,” Panuphong Limbuprasertkul, president of the foundation, told the Phuket Gazette today.

Items can be dropped off in Patong at the Phuket branch of the foundation, officially called the Shree Bhagawat Dhaam Sanatan Mandir Foundation, which is located in Soi Kuan Yang off of Phra Baramee Road.

“I have spoken with Thai Airways representatives, and they have agreed to help us transport the supplies. I am sorting out the date and time when we will fly them over. This should be finalized soon,” Mr Panuphong added.

A Thai Airways representative based in Phuket, who asked not to be named, confirmed to the Gazette that they were working together with the Nepalese consulate and the Shree Bhagawat Dhaam Sanatan Mandir Foundation to arrange the transport of supplies to the affected areas.

“We are willing to help in any way we can, we just need to know the date and what needs to be transported,” he said.

“We raised about 20,000 baht on Bangla Road last night. We now have more than 1 million baht raised to help survivors of the earthquake,” Mr Panuphong said.