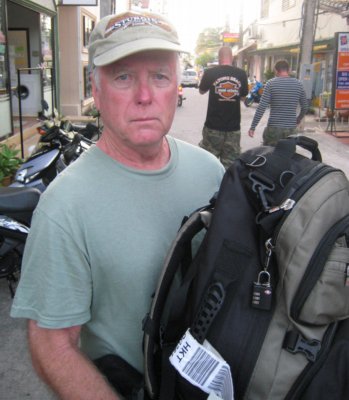 MAI KHAO: A former Sheriff in San Bernadino County, California, had valuables stolen from his luggage while it was on an Orient Thai Airlines One-Two-Go flight from Bangkok to Phuket on January 10.

Californian Larry Morgan, who is in Thailand on a month-long trip, said that he checked his bag in with One-Two-Go staff at Suvarnabhumi Airport about 7 pm on January 10. His flight, OG261, was due to depart at 8:15 pm, arriving in Phuket at 9:35 pm.

When he collected his bag in Phuket, one of the zip tabs had been cut, leaving the zip free to be opened.

Mr Morgan reported the crime to the Orient Thai Airlines office at Phuket International Airport (PIA) and later with the Tourist Police in Patong.

He was given a “Property Irregularity Report” by the airline, but told that Orient Thai Airlines is not liable for losses of electronic goods, among a list of many other valuable items.

The airline initially declined any form of compensation, in accordance with their conditions of travel, despite the fact that Mr Morgan had no other travel insurance.

Two other passengers on the flight also complained of having their baggage tampered with, said Mr Morgan.

However, Adun Rattanapalin, Orient Thai Airlines Station Chief in Phuket, said that those two complaints were about damage to baggage, rather than theft.

K. Adun said that this was the first such case Orient Thai has had in Phuket. He and his staff are investigating the case and will send details to the airline’s head office in Bangkok, he assured.

Although the airline does not usually compensate passengers for the loss of valuables in hold baggage, it might consider making an exception in this case, he said.

“We will have to ask our management board to consider [compensating Mr Morgan] as we are worried about damage to our good image,” K. Adun said.

However, an angry Mr Morgan said, “I trusted that the airline employees would be honest and professional. I guess I was wrong.

“I couldn’t believe that my personal belongings could be in jeopardy on a one-hour flight from Bangkok to Phuket.

“I now have to go up to Chiang Mai with only a disposable camera.”