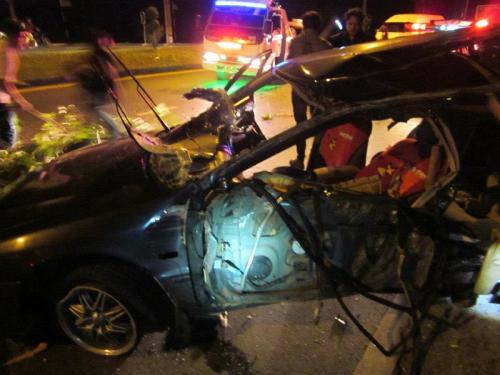 PHUKET: A former broadcaster for the National Broadcasting Services of Thailand (NBT) has become the eighth person to die on Phuket’s roads since the Seven Days of Danger national new year road-safety campaign began last Thursday.

Eak Eakwewchakul, 26, died when his Toyota sedan overshot a curve and hit a power pole near the Phuket Go-Kart track in Kathu on his way to Phuket Town, Phuket Governor Maitri Inthusut explained this morning.

Police were notified of the accident at about 6:10am.

Governor Maitri reported that before the new year began, seven people had died in 17 accidents that also resulted in 16 people being injured in Phuket since the Seven Days of Danger campaign began.

“Eleven of those injured were males and five were females, most of them were 30 to 49 years old,” he said.

Gov Maitri also pointed out that police checkpoints set up during the campaign had reported stopping 12,232 vehicles and finding 1,849 motorists breaking the law.

“Most of them were not carry driving licenses, not wearing seat belts and/or not wearing helmets,” he explained.

However, the governor quickly refocused his attention on preventing road accidents.

“The top causes of accidents, and deaths and injuries, were drunk driving, speeding and not wearing helmets. All these are attributable to people’s behavior,” the governor pointed out.

“There have been fewer accidents this year compared with last year, but there have been more deaths. Part of this is because of motorcyclists not wearing helmets,” he said.

“More must be done to have people understand that wearing helmets is imperative. Hotel operators and [motorbike] rental operators will be called in to make sure their customers wear helmets while riding motorbikes.

“Also, taxi drivers who drive at high speed to and from the airport will be targeted as this is one of the causes of road accidents,” he said.

The road death and injury toll across the country since the Seven Days of Danger began climbed to 254 deaths and 2,454 injured, state news agency MCOT reported earlier today.

Of those, 52 people died and 556 were injured in 524 accidents nationwide on New Year’s Eve alone.

Phuket ushers in the New Year 2013