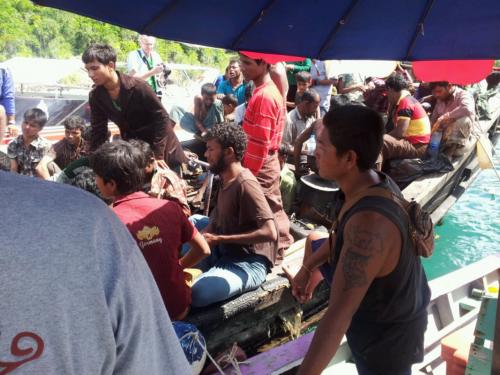 PHUKET: A boat carrying about 70 Rohingya fleeing persecution in their homeland in Myanmar were taken into custody by the Thai authorities off Phuket today.

Local fisherman first sighted the boat off Bon Island, off Rawai Beach at the southern end of Phuket, and reported it to Rawai Municipality.

“I was told by fishermen this morning that there was a suspicious-looking boat with many people on board floating off Koh Bon, so I reported it to Chalong Police,” Rawai Mayor Aroon Solos told the Phuket Gazette.

On board, they counted 70 Rohingya.

The Royal Thai Navy Third Area Command, located on Phuket’s Cape Panwa, and Marine Police were alerted and arrived to take the Rohingya into custody.

“According to our investigation so far, these Rohingya were on their way to other countries, but there was a heavy storm during their journey and their boat ran out of fuel, so they were forced to stop,” Mayor Aroon explained.

“They asked for food and boat fuel, which our municipality officers have already prepared for them,” he added.