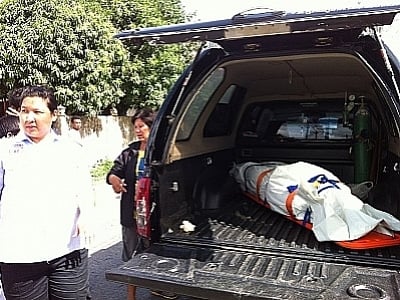 PHUKET: Police are attempting to identify the body of a man found floating in an old tin mine lagoon in Chalong yesterday afternoon.

Phuket Ruamjai Foundation rescue workers and Lt Col Boonlert Onklang arrived along with officers from the Chalong Police to find a large crowd of people gathered at the scene on Luang Por Chuang Road.

He had a tattoo of a swan on his left upper arm and light-colored skin, he added. [The Gazette notes the light skin coloration is common among bodies found days after being exposed to the elements.]

The body was dressed only in black underwear and a sleeveless dark blue shirt with “scarling 74” printed on it.

Police believe the man died five to seven days before his body was found.

The body was taken to Vachira Phuket Hospital in Phuket Town, where police hope that a medical examination will determine the cause of death.

“I was fishing at the lagoon when I saw something floating in the middle of the water. I looked carefully and then realized it was a dead body. I was terrified and called other villagers to see. Then I reported it to the police,” said Mrs Waree.

Police officers at the scene found no evidence that enabled them to identify the body.

“I think the body is that of a migrant who worked in the area. He may have come to the lagoon to fish and accidentally fell into the water and drowned.

“I will investigate further to try to identify the body,” Lt Col Boonlert.