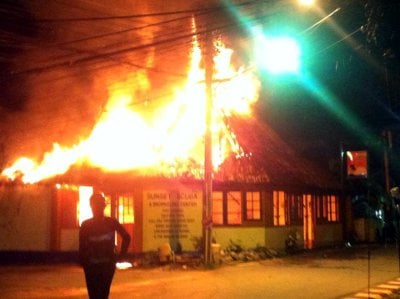 PHUKET: A newly constructed scuba diving shop and bar near the Kamala beachfront went up in flames early Sunday morning, causing an estimated one million baht in damage.

It took the Kamala Fire Department about 20 minutes to dowse the flames that had engulfed Sunset Scuba and Snorkeling Center, but by that point the entire building had been gutted, Kamala Police officer Wanlop Pitakporn told the Phuket Gazette.

During the construction process, finished a several months ago, a complaint was filed to Kamala Police by locals who were concerned about the safety of the building based on the use of flammable materials such as Nypa leaves, Maj Wanlop.

“However, the company had not been cooperating with our investigation into the safety of the building,” he said.