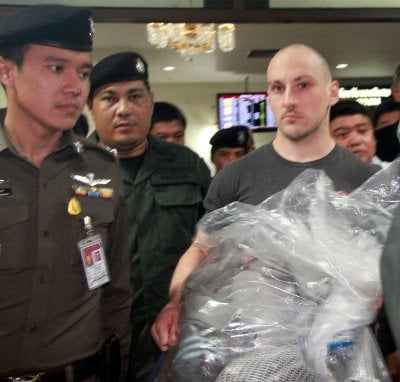 PHUKET: British national Lee Aldhouse, charged with the murder of former US Marine Dashawn Longfellow in Phuket in 2010, has confessed to police to stabbing Mr Longfellow, but has denied any intention to kill him.

Mr Aldhouse was extradited from the United Kingdom on Friday to stand trial in Phuket. He arrived at Phuket Airport on Saturday and was taken directly to Chalong Police Station, where he was charged with murder.

He is reportedly the first British national to be extradited from the UK to Thailand in 100 years.

“Mr Aldhouse is charged with premeditated murder under Section 288 of the Criminal Code, which states, ‘Whoever, murdering the other person, shall be imprisoned by death or imprisoned as from 15 years to 20 years,” Chalong Police Deputy Superintendent Jumroon Plaiduang confirmed to the Phuket Gazette this morning.

However, Lt Col Jumroon added, “Mr Aldhouse accepted that he stabbed American Marine Dashawn Longfellow, but he claimed that he did not have any intention to kill the man.”

“Mr Aldhouse has not yet entered a plea to the court, as we have yet to hand over the case file to the Public Prosecutor,” Col Jumroon explained.

“He was in court this morning only so we could hand him over to court custody. The judge ordered that Mr Aldhouse be detained at Phuket Provincial Prison until his trial begins,” he added.

In obtaining Mr Aldhouse’s extradition from the UK, the Office of the Attorney General in Bangkok has reportedly given assurances that he will not face the death penalty if found guilty.