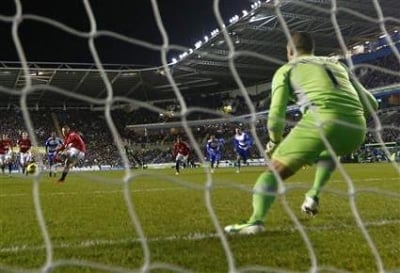 PHUKET: Manchester United moved three points clear at the top of the Premier League after an extraordinary 4-3 victory at Reading on Saturday in which all seven goals arrived in the first 34 minutes of the match.

Defensive manuals were ripped up as United trailed 1-0 and 3-2 but once again they showed their trademark resilience as two goals from Wayne Rooney, one from Anderson, and Robin van Persie’s 10th league strike of the season sealed the points.

Champions Manchester City needed a Carlos Tevez penalty to draw 1-1 at home to Everton – their 37th home league match without defeat – but they lost ground to their rivals in what is already looking like a two-horse title race.

Third-placed Chelsea surrendered a halftime lead to lose 3-1 at West Ham United to leave under-fire interim manager Rafael Benitez still without a win while Arsene Wenger was the target of jeers as his Arsenal side were humbled 2-0 by Swansea City.

Benitez, whose appointment in the wake of Roberto Di Matteo’s sacking has proved unpopular among fans, is the first Chelsea manager not to win any of his first three matches in charge since Russian oligarch Roman Abramovich bought the club.

“In the second half we didn’t start well, they got on top of us and we couldn’t manage,” former Liverpool manager Benitez, whose first two matches in charge ended in 0-0 draws against Manchester City and Fulham, told Sky Sports.

The European champions, now without a win in seven league matches having topped the table, are joined on 26 points by Tottenham Hostpur, who won 3-0 at Fulham with England striker Jermain Defoe scoring twice.

West Bromwich Albion slipped to fifth, also on 26 points, after a 1-0 defeat at home by Stoke City.

Their defensive fragility was exposed again by Reading, who took the lead after eight minutes through Hal Robson-Kanu.

Anderson equalised five minutes later after combining with Ashley Young before Jay Tabb bundled over Jonny Evans in the box and Wayne Rooney fired United ahead from the spot.

Two goals in four minutes from Adam Le Fondre and Sean Morrison put Reading 3-2 ahead after 23 minutes but Rooney turned in Patrice Evra’s cross to make it 3-3 before Van Persie kept his head to slot home what turned out to be the winner.

“It was agony. The worst defending of this season and we needed to do something about it,” United manager Alex Ferguson, who hauled off defender Rafael in the first half, said.

“We’re needing to rescue the situation all the time. Fortunately we have players who can do that.”

Arsenal were booed off at the Emirates as they slipped to 10th following Michu’s late double for Michael Laudrup’s impressive Swansea side.

“Of course you can understand the fans when we lose a match the way we did today,” Wenger told Sky Sports.

“We were maybe lacking a bit of maturity to keep it 0-0. It’s a big blow because the games are coming very quickly. Today was not the way we want to play football.”

Liverpool were 1-0 winners at home to Southampton and bottom club Queens Park Rangers drew 1-1 at home to Aston Villa as their search for a first league win of the season continues under new manager Harry Redknapp.

In control
Banners protesting about Benitez’s shock appointment were still in evidence at Upton Park, yet for 45 minutes Chelsea looked in total control and heading for victory.

When Fernando Torres cut the ball back from the byline for Mata to shoot Chelsea in front after 13 minutes, it seemed that Benitez could silence his critics, at least for a day.

West Ham were far more adventurous after the break and deservedly drew level when Cole nodded past Cech from close range after appearing to climb over Branislav Ivanovic.

Mata nearly restored Chelsea’s lead with a superb free kick that thudded against the woodwork and Chelsea looked the more likely winners as the game entered its closing stages.

However, West Ham roused themselves to beat Chelsea for the first time in nine years.

With four minutes of normal time remaining Diame smashed a low shot past Cech and with isgruntled Chelsea fans already heading for the exits Maiga converted a rebound for the third after Cech had saved Matt Taylor’s shot.

Manchester City extended their unbeaten league run at home to 37 matches but they were given a scare when Marouane Fellaini scored for Everton after 37 minutes.

Argentine Tevez levelled just before halftime when Fellaini was adjudged to have dragged down Edin Dzeko.

“If teams come here and get soft penalties awarded against them it’s going to be hard to get a result,” Everton manager David Moyes told Sky Sports after his sixth-placed side’s eighth draw in 15 league games.