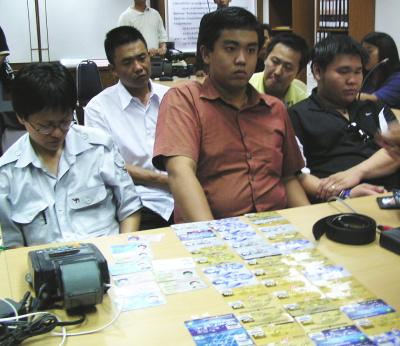 PATONG: Five Malaysians were arrested on Saturday for using fake credit cards to buy mobile phones at Ploi Telecom shop, Sai Namyen Rd – the same shop where five Filipinos were arrested earlier in the week for attempting the same crime.

The accused, a woman named by police as Neoh Paik Poh and four men named as Jerry Hong Siong Beng, Lim Yih Chyuan, Lian Hock Poo and Chin Khye Sheng, were found after their arrest to be carrying a total of 43 fake credit cards and three false Singaporean passports.

The shop’s owner, Patchar Budtayotee, told the Gazette, “Five people came to the shop in a tuk tuk. They said they would use their credit cards because they didn’t have enough cash. They then showed me their cards and passports.

“I became suspicous when they ordered twelve Nokia 7610 phones, which cost 21,900 baht each, and didn’t ask for any discount. I called the bank and discovered that the cards were fake. Then I called the police.”

This was the third time in a week that the shop had been targeted by fraudsters.

On August 9, five Filipinos were arrested for credit-card fraud and on August 12 three other Malaysians successfully used fake cards to buy mobile phones and call cards.

In all, there have been five attempts to cheat the shop this year, K. Patchar added.

She explained, “When [genuine] card holders refuse to pay their bills, the bank looks for purchase details from us. We don’t always know at the time of purchase if the credit cards are genuine. If we don’t check with the bank then we are responsible.”

Pol Col Chalit Thinthanee, Superintendent of Kathu Police Station said, “Shop owners should be wary of customers who buy expensive items without haggling over the price.

“They usually come in a group and then buy one or two items each. If shop owners are suspicous, they should check with the bank to see if the credit cards have been stolen. There are other gangs operating in this way who are currently being investigated.

“Previous cases involved Filipinos and Singaporeans. They were posing as tourists but really came to Patong to commit fraud. We are also looking for the three people [who cheated the shop on August 12] and expect to find them soon.”

Pol Lt Col Boonlert Onklang, of Kathu Police Station told the Gazette, “The Malaysians we arrested on Saturday were charged with being accomplices in the forgery of documents and fraud. Three of them were also charged with having forged passports.

He said that the five had admitted buying the fake credit cards in Malaysia for 7,000 baht each and the forged Singaporean passports for 15,000 baht each.

The five are currently in custody in the Phuket Provincial Prison awaiting an appearance in court.

Three murdered in one night