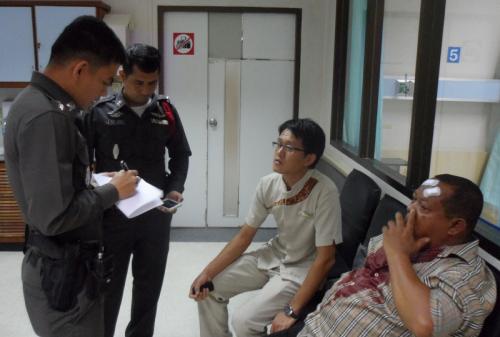 PHUKET: Police today arrested five men for the attack on a Kedah royal family bodyguard at a high-end resort in Patong just after midnight on Tuesday.

Four of the men, including three Malaysians, were arrested while trying to exit Thailand at the busy Sadao checkpoint in Songkhla province.

The first arrest was made at a rented house in Sikao District in Trang province, south of Phuket.

Prakorn Leesopa, 32, from Phattalung, was taken into custody after a manhunt sweeping across Southern Thailand was launched following the attack on Mohd Sobri Bin Said, 53.

Mr Said was one of the bodyguards accompanying Kedah Council of Regency chairman Tan Sri Tunku Annuar Sultan Badlishah during his stay in Phuket at the Millennium Resort Patong hotel.

In his statement to police, Mr Prakorn said he received a call on Tuesday night from his older brother Sakorn Srisopha, 34, asking him to drive to him to Patong.

When the men entered the room, they grabbed Mr Said, tied his hands, sat him in a chair and began to hit him, Mr Prakorn said.

“One of the Malaysian men pushed me into the bathroom and locked me in there so I couldn’t see what was going on,” he told police.

“I heard the men searching for something in the room and asking about a passport and mobile phone,” he added.

About five minutes later, Mr Prakorn was let out of the bathroom and escorted downstairs and out of the hotel, he said.

“They brought me all the way back to my house in Sikao. Someone else drove. The long-haired Malaysian man gave me 5,000 baht and then they left,” he said.

Mr Prakorn protested his innocence in the crime.

“I had never seen the three men before. If I knew they were going to attack a VIP [sic] I wouldn’t have taken any part in it,” he said.

Lt Thawatchai Srimai of the Patong Police, who responded to the report of the attack on Tuesday night, confirmed that initially only four men were wanted for the attack after questioning the bodyguard, Mr Said, at Patong Hospital.

“Mr Said was covered in blood from a head injury and covered with bruises,” said Lt Thawatchai.

Mr Said told police he had received a tip-off about the attack and switched rooms in order to protect Tunku Annuar.

Tunku Annuar and his party booked more than 10 rooms at the hotel when they checked in on Monday.

“They used a key card to enter the room and waited for Tunku Annuar,” Lt Thawatchai said.

“When Mr Said entered the room, they grabbed him by the throat and threatened him with a knife. They used electric wire to tie his hands, hit him with a hard object on the head and beat him,” he added.

Following the arrests today, Provincial Police Commander Choti Chavalviwat confirmed to the Phuket Gazette that Mr Prakorn has been charged with gang robbery.

Following the arrest of Mr Prakorn in Trang, Patong Police Superintendent Chiraphat Pochanaphan this afternoon said that the four other suspects, including Mr Sakorn, were arrested today in Sadao.

Capt Opas Chaiboon of the Sikao Police confirmed that all four arrested in Sadao have also been charged with gang robbery.

Police have yet to release the names of the three Malaysian men involved in the attack.

A source told the Gazette that the men were already known to hotel staff as part of the security personnel who checked in with Tunku Annuar.

The source said the incident was an “internal affair that will be dealt with when they return to Malaysia.”

Phuket Police have yet to confirm or deny this.

Tunku Annuar and his party checked out of the hotel today.

“The guest was taken to the hospital and has been treated. The hotel is doing its utmost to offer assistance to the guest. No one else was affected, and the hotel assures all guests that business is as usual.”