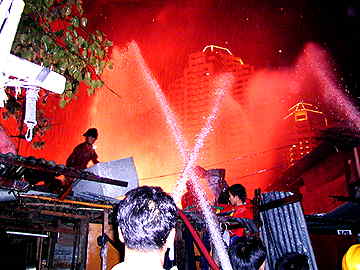 BANGKOK (Gazette exclusive): Fifty firemen and 30 fire trucks battled for five hours this morning to put out a blaze in a shanty neighborhood behind Wat Pathum Wanararm and the World Trade Center in Pathumwan. Although no deaths or injuries have yet been reported, the fire left 40 homes gutted over an area of about two rai. One witness told the Gazette, “When the fire was at its highest an area about 60 meters by 60 was completely engulfed in flames. The heat from the blaze was intense even 80 meters away. “Hundreds of people will have lost their homes, their belongings and their income,” the witness added. Pol L/Cpl Wairit Natomtong of Bantadtong Fire Department, which coordinated the battle against the blaze, told the Gazette that the fire started just after midnight and was not fully extinguished until 5:18 am. “The problem was that the fire trucks could not get to the fire because the paths in there are too narrow. This morning we had to connect, sometimes, five or six hoses together,” he said. The cause of the fire is being investigated by officers from Pathumwan Police Station.