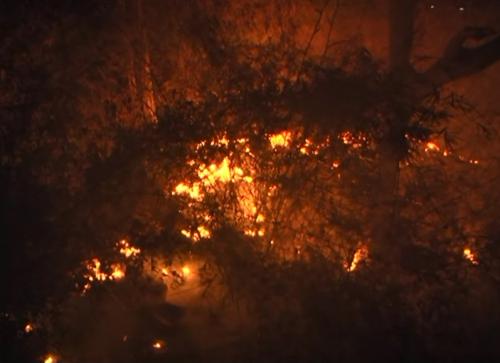 PHUKET: Flames engulfed the dense jungle on Toh Sae Hill on Friday night after a dry tree caught on fire, most likely from a discarded cigarette, said a Phuket firefighter.

Phuket City Municipality Firefighter Chief Pairat Sulin was notified of the fire by residents and led his brigade to the scene near the Khao Toh Sae Viewpoint at about 11pm.

“When we arrived, we realized how tall the flames were. The trees are more susceptible to fire during the dry season,” Mr Pairat explained.

It took about three hours for the firefighters to subdue the blaze.

“We were able to control the area near the viewpoint, but the dense jungle made it difficult for us to move down the hill. We released water down the slope to reach the rest of the fire,” said Mr Pairat.

“We stayed on site until morning to ensure that nothing else caught fire.”

About two rai of jungle was destroyed in the incident.

“I believe the fire was caused by a cigarette dropped on the dry ground next to the trees,” Mr Pairat said.

“I would like to warn Phuket residents and tourists visiting the viewpoint to be aware of potential fire hazards. Do not drop anything that could possibly start a fire on the hill.”

Phuket maid pulled from bus to Bangkok with over B100,000 in stolen loot