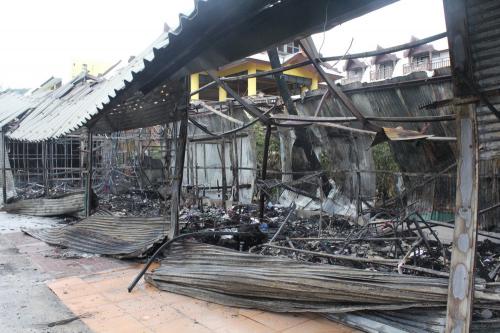 PHUKET: Police are investigating the cause of a fire on the Karon beach road that engulfed seven shop units at the Karon Plaza shopping bazaar early on Saturday.

Three firetrucks from Karon Municipality were called in just before 6am to contain the blaze, which took 30 minutes to extinguish.

“The plaza sells fashion items, such as clothes and shoes, and many other types of goods,” explained Lt Sathaporn Srinoon of Karon Police.

Initial estimates valued the damage by the fire at about 500,000 baht, he said.

Prakong Lertsoongnern, a security guard at the nearby Woraburi Phuket Resort, said the fire spread quickly.

“At 5:56am, I saw sparks at shop unit Number 3. Then the fire spread quickly, so I called Karon Municipality for help,” he told the Phuket Gazette.

By the time firefighters arrived, many people had gathered at the plaza in fear of the fire spreading to shops and buildings nearby.

“The cause of the fire could have been arson or a short circuit. We will question the shop owners and have experts investigate to determine the cause,” Lt Sathaporn said.