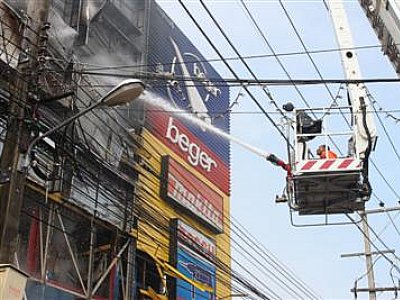 PHUKET: A fire at a construction equipment store in downtown Cherng Talay this morning caused an estimated 10 million baht in damages, according to Phuket Police.

Cherng Talay Police at 6am were informed of a fire at the Cherng Talay Ruam Wassadu store, located near their police station on Srisoonthorn Road.

A water truck from the nearby Laguna Phuket resort complex also assisted in the effort to extinguish the blaze.

Access to the fire was made difficult by power cables suspended across the front of the building. Firefighters also had to break though a wall on the upper floors to douse the flames.

The key firefighting apparatus was the versatile Iveco Bronto Skylift cherry picker operated by the DDPM-Phuket.

A witness told Phuket Gazette that the fire appeared to have started on the first floor of the three-story shophouse, which was vacant at the time.

It took about half an hour for Cherng Talay Municipality workers to arrive, by which time the fire had spread upstairs, the witness said.

It wasn’t until about 8:30am that all of the equipment needed to fight the fire arrived at the scene.

The flames were finally extinguished by about 9:30am.

Shopowner Kamol Sawatdee-udom was too busy coordinating with officers to comment or say whether the building was covered by accident insurance.

His wife was also at the scene, crying inconsolably as she watched the family business go up in flames.

Cherng Talay Police said they suspected an electrical short started the conflagration, which was fuelled by volatile chemicals such as paint thinner stored inside.

Police estimated the damage at about 10 million baht.

One firefighter hurt his hand in the firefighting effort. No other injuries were reported.