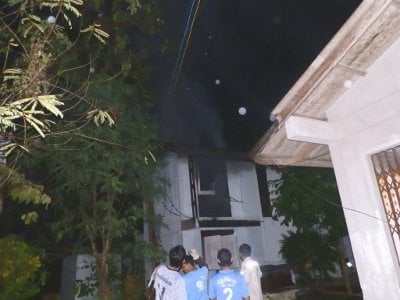 PHUKET: Phuket firefighters extinguished a fire at the Thalang District Office compound in the early hours of this morning.

The fire was reported to Thalang Police at about 2:15am.

Thepkrasattri Municipality firefighters took about half an hour to extinguish the blaze, which gutted a room on the second floor of a wooden home used as the residence of a government officer.

Two children sleeping in the room woke and escaped when the fire broke out. They called for help. The ages of the children were not reported.

They told Phuket Kusoldharm Foundation rescuers at the scene that they were awakened by the heat from the flames coming from a wall-mounted electrical fixture.

Almost all of their belongings were destroyed, they said after the blaze was extinguished.

The cause of the fire appeared to be faulty wiring, rescue workers said.

Phuket ATM scams: Even professionals get caught out