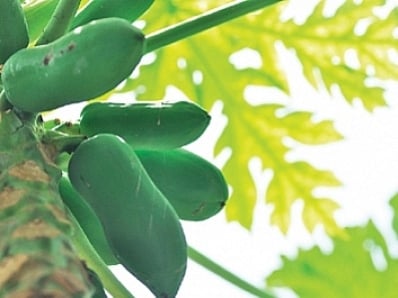 PHUKET: When I was young, papayas (pronounced papaiya) were considered very exotic, rarities that occasionally came along with other fresh fruit – mangoes and kiwi fruit, at the end of an expensive dinner.

Here papayas (stress on the last syllable please) are the most available of fruit. In Isarn, a meal without green shredded papayas in the mix is almost unthinkable. It’s a basis for soups, salads, stews and much else besides. Som tam is a classic papaya concoction. Here, in the south, the huge fruits are more often allowed to ripen and are served as a dessert, though they are also used in savory dishes. The distinctive flavor is not to everyone’s taste – sweet and slightly perfumed. If you like melons, you will probably like papayas.

Either way, the plant, known elsewhere in the world as the paw-paw, is probably the easiest of all fruit trees to cultivate in Thailand – and one of the most civilized. Civilized because it grows vigorously and quickly from seed, has a neat appearance, and crops heavily. In fact, it produces those huge succulent, marrow-shaped offerings in less than a year. Having borne a crop continuously for several months, a haul which may consist of as many as twenty or more weighing up to two kilos, its top leaves begin to turn yellow. That is usually a sign that the plant is on the way out. It can then be unceremoniously hacked down – since the stem is fleshy and hollow – with a single blow from a sharp machete. The root will soon rot away.

Papayas are technically not trees at all, but they give every appearance of being so. They are attractive plants, single-stemmed and with a crown of soft, palmately lobed leaves. Normally there are no branches and the fruit hang down from the trunk just below the crown.

Unique? Yes. There is only one species (carica papaya), which originated from Mexico, though inevitably there have been a number of commercial cultivars such as Maradol, Sunrise and Caribbean Red. These are normally ready to eat when the skin is turning red or orange and still has patches of green. Pick it as soon as it is ripe: the fruit rapidly goes soft and begins to rot once it has passed its sell-by date. In some tropical cultures, the papaya, which contains an enzyme called papain has other medicinal uses – bizarrely as a contraceptive, and for tenderizing meat. The black seeds can also be eaten: crushed, they serve as a substitute for pepper.

Peculiarly suited to this island’s climate, the papaya is beginning to become naturalized on vacant lots around Phuket. If you do intend to grow it, plant a number of the peppery seeds from a ripe fruit directly into the soil, then water and await results. Many will germinate after a couple of weeks. Since the males do not bear fruit, remove them once they have produced their slender stalks with small white blooms. You may decide to keep one male, but usually papayas are self-pollinating, or are cross pollinated by insects or wind.

The plants can take oodles of sun, and will also need plenty of water and nutrients. After all they are going to produce lots of goodies. Moreover, they are relatively disease free – at least in Phuket. Hawaii had its entire crop decimated by the ring-spot virus, but here nothing worse than the odd fruit-fly seems to impede their upward progress.