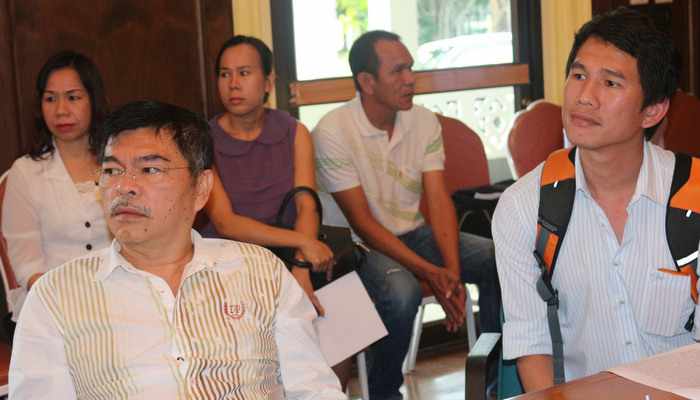 PHUKET: The Land Department has set up a task force to specifically establish whether two land titles covering 65 rai at Freedom Beach – with an estimated value of at least 1 billion baht – were legally issued.

The task force was officially formed last Friday and has 60 days to submit its findings, Land Department Deputy Director-General Thammasak Chana told the claimant, Eakkachai Sae-Iw, and his lawyer At Srisamut yesterday morning.

The two Chanote titles, numbered 98414 and 98415, are both alleged to cover land within the Khao Nakkered National Forest, Mr Thammasak explained.

“We received a request from the Royal Forest Department [RFD] asking us to revoke the titles as they had confirmed that the land in question was within a protected forest,” Mr Thammasak said.

“If the new task force agrees and asks the Director-General of the Land Department to revoke the titles, the claimant will have 30 days to appeal.”

Mr Eakkachai’s lawyer, Mr At, said that he would appeal any decision to revoke the titles.

“Even if the Land Department decides to revoke the Chanote, the court may not agree – and the highest authority is the court,” Mr At said.

Mr At claimed that Mr Eakkachai had evidence that the land was acquired before the area was declared a national forest and that he could prove purchase of the land through a tax payment receipt – the lowest form of land claim available in the Kingdom.

“I stand by my words that the two plots are fully legal,” Mr At said. “I believe somebody wants to pick on my client, so they filed a complaint against him.”

Mr At did not elaborate on who might have targeted Mr Eakkachai for investigation, but did reveal that the land – which he estimated to have a value of “at least 1 billion baht” – had been used to secure a mortgage of 400 million baht.

“The complaint is affecting my client, as people who are looking to buy the land have lost their confidence in making the investment,” Mr At said.

“And while this drags on, my client is responsible for paying the interest on the 400mn-baht debt. My client was going to build a resort on the land, but the project is on hold because of this complaint.”

However, Mr Thammasak explained that the ownership of the plots had been in question for years.

“The application to issue Chanote titles for the land was filed on July 18, 1990 by Panthong Na Ranong. Then, on April 12, 2011, the titles were issued under the name of Mr Eakkachai,” he explained.

“Later, on April 24 this year, the RFD sent another request to the Land Department – this time the request was to revoke the Chanote titles because the two plots were on land that was declared a national forest in 1958.”

The dubious origins of the land titles came under scrutiny by the National Counter-Corruption Commission (NACC) in 2012 in a probe that revealed that “at least 13 officials were involved in illegally issuing land titles” (story here).

At that time, the land was estimated to be valued at more than 3bn baht, about three times the estimate given by Mr At.

The Land Department was tasked with investigating the alleged involvement of corrupt officials in its ranks (story here).

The result of that investigation was not made public.

In reference to the involvement of corrupt officials illegally issuing land titles, Phuket Governor Maitri Inthusut vowed to push for transparency for the actions of officials.

“Officials are now investigating the land problems. We will fix the problems that occurred in the past to make sure that titles issued in the future are clean,” Governor Maitri said.

Phuket Land Office Chief Somyot Laochoo said that “only a very small per cent” of Chanote titles had been issued illegally by officials.

“The rest are fine,” he said. “I urge any investors to check with the Phuket Land Office in Phuket Town, in Thalang or in Kathu, to confirm whether or not a land title is genuine.”